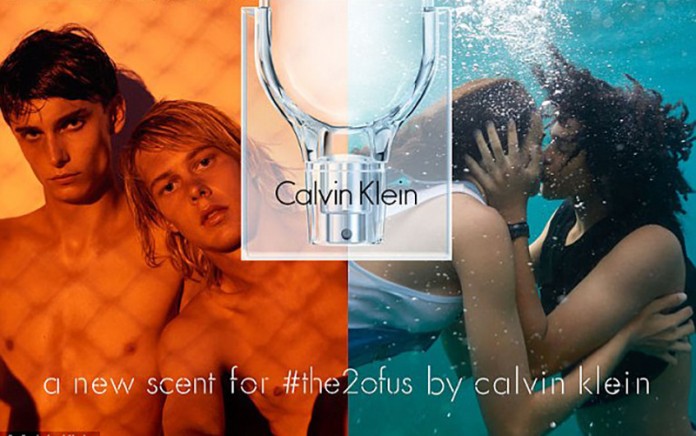 Strange, alternative ingredients such as wasabi and wet cobblestones have been used in making the brand new Calvin Klein fragrance ck2 which will be released in stores on Feb 22.

This is one of the most anticipated fragrance launches of the new year as ck2 is claiming to be completely gender-free, a scent for both men and women.

In their marketing material, ck2 claims it will capture the thrill of living life and celebrate the differences that make our connections richer and define what makes us, us.

The imagery surrounding the launch shows four stories that fold into one. Lots of glances between couples of different as “four couples play out the free-spirited, raw and passionate narratives of today’s youth.”

“The meaningful connections emphasize the thrill of life shared by two people and magnify the uniqueness of each relationship in our lives shared through a tapestry of experiences and emotion that ultimately define who we are,” said the promotional material.

Keeping in line with that idea, the ad campaign features bi-racial and same-sex couples surrounding the image of the clear, pill-shaped bottle.

The bottle also has another unique design feature: it can be fitted into its base in two different ways and is described by the brand as: ‘a pure, transparent and futuristic design that is cool and gender-free’.

Unfortunately, samples have run out so this reviewer doesn’t have the chance to give you an idea on what it smells like, but if that is an indication of the hype then it might be worth checking out.

In Australia Myer was given exclusivity and released the range in mid-January.