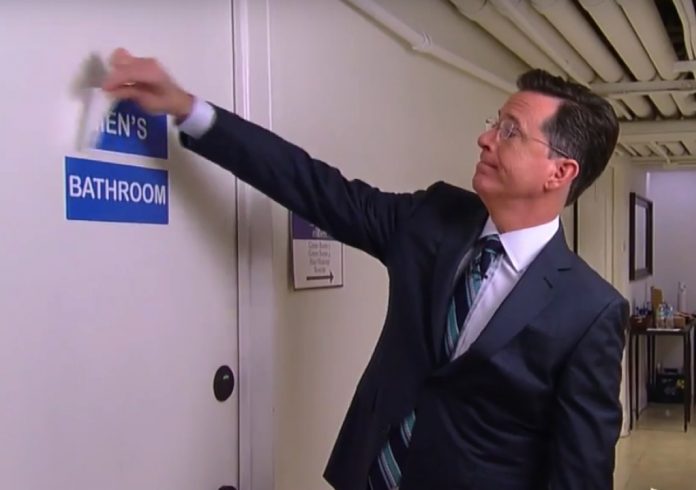 During the opening skit of The Late Show, Stephen Colbert has responded to Republican Presidential frontrunner Donald Trump and his claims on the cost of establishing gender-neutral bathrooms.

The self-proclaimed real-estate mogul and expert claimed the creating gender-neutral bathroom facilities in the United States would prove to be “unbelievably expensive.”

However, Stephen Colbert had an alternative view and decided to show America the true cost of creating the gender-neutral bathroom facilities.

In the Wednesday night skit, Colbert approaches a bathroom door before tearing off a sign stating “men’s,” only leaving a sign printed with “bathroom” underneath.

Colbert then asks a consultant for the cost of the conversion.

To which the “accountant” replies “Two hundred billion dollars.”

The Republican presidential candidate’s comments were originally made on the O’Reilly Factor when the Fox News host asked if his properties provided gender-neutral bathrooms.

“No, we don’t have that,” replied Donald Trump. “I hope not. Because frankly, it would be unbelievably expensive nationwide. It would be hundreds of billions of dollars.”

Trump who had initially supported the right of transgender people to choose a bathroom that corresponds with their gender identity, has since backtracked.

“What I support is let the states decide and I think the states will do, hopefully, the right thing,” said Trump, ignoring a question asked by Jimmy Kimmel on his show Jimmy Kimmel Live! who pressed Trump to give a more definitive stance.

Following an eruption of laughter from the audience, Trump then fumbled and responded saying, “I don’t know yet. I mean, I don’t know. Honestly, I don’t know.”

Watch the skit below: