Nineteen gay men and trans women who were arrested in a raid on an LGBTIQ shelter in Uganda in March are finally free after charges against them were dropped.

The director of public prosecutions officially withdrew all charges against the traumatised individuals who’d been refused bail and access to their lawyers for 49 days. In response, the group was released by the Nsangi Magistrates’ Court.

Led by the Mayor of Nsangi Municipality, the Children of the Sun Foundation’s shelter for homeless LGBTIQ youth in the town of Kyengera was raided by residents and security forces on 29 March.

While the authorities claimed that the raid was due the individuals illegally gathering under the country’s coronavirus lockdown regulations, activists and the men’s lawyers said that this was an excuse to target LGBTIQ people.

The group’s release followed a victory on 14 May for Sexual Minorities Uganda (SMUG) and the Human Rights Awareness and Promotion Forum (HRAPF) in the High Court which ordered the authorities to grant lawyers reasonable access to the 19.

On 15 May, lawyers from HRAPF were finally able to meet with the jailed victims. HRAPF reported that they were in good spirits, although most were sick with diarrhoea, typhoid and other infections which had not been treated. Some were also unable to access their HIV antiretroviral treatment.

“We are now tasked with getting them medical treatment, psycho-social support and a safe place to stay.

“This tormenting of the LGBTIQ community has to end. I appeal to law enforcement officers to refrain from using their powers to harass and target LGBTIQ people. The arrest and incarceration of the 19 wasn’t necessary.”

The lead counsel in the case, Dr Adrian Jjuuko, said it had been a struggle.

“We had to go to court to get an order just to get access to them. Questions remain. Charges against the 19 have been withdrawn, but they have been in prison for 49 days.

“What does this mean for justice? The charges shouldn’t have been imposed in the first place. This is not the end of the matter. We will follow up on why the charges were imposed.” 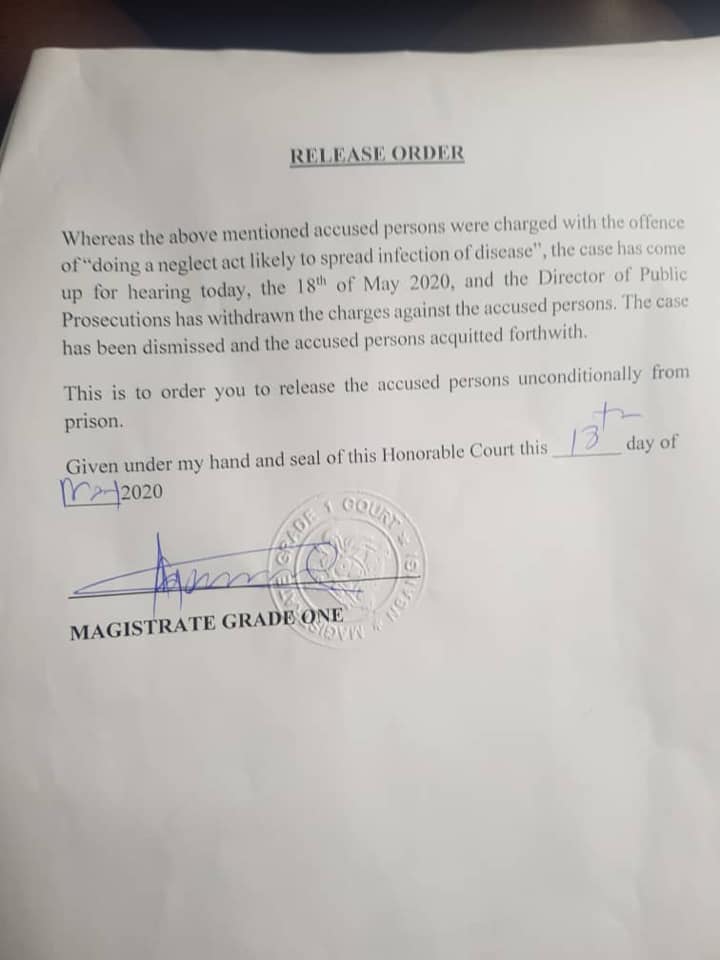 The individuals – who range in age from 19 to 32 – endured homophobic abuse during the arrests and some were reportedly beaten by police. A search was conducted in the shelter to find “evidence” of homosexuality. Some of the items kept as evidence included bottles of PrEP, oral HIV self-testing kits and several condoms.

“I wondered why innocent people seeking a safe space would be arrested. It is devastating to see an already vulnerable community put in harm’s way by law enforcement officers who are supposed to be protecting them.”