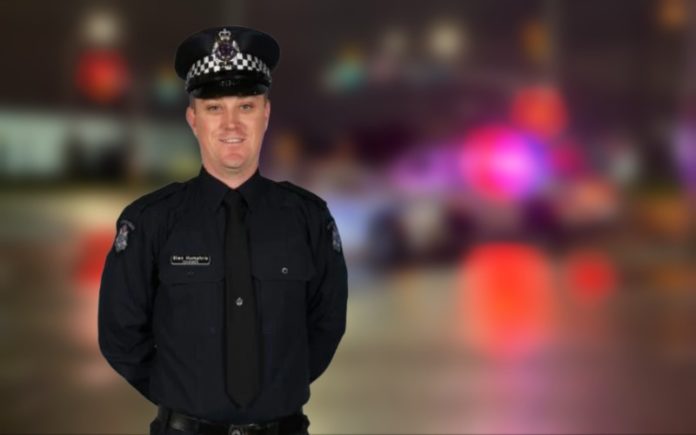 As many public buildings turned blue around Victoria on Thursday night in memory of the four Police that were killed in a horrific roadside car accident on a Melbourne Freeway on Wednesday, members of the Australian gay community are mourning the loss of Constable Glenn Humphris.

Constable Humphris was one of the four police tragically lost and the community has rallied around his partner Todd and family in NSW.

Victoria’s top cop has paid an emotional tribute to the four police officers killed in the Eastern Freeway truck crash.

Chief Commissioner Graham Ashton said the officers had been undertaking their everyday duties in helping to keep the community safe when they were killed.

“It takes a special person to put on the blue uniform and turn up to work each day to ­respond to those in need,” Mr Ashton said.

A new recruit, Constable Humphris began his policing career only last year after moving to Victoria from Newcastle with his partner Todd.

In a post of Victoria Police Facebook page, it was explained how Glenn Humphris came to Victoria and began his policing career in 2019, after first gaining a series of accomplishments in other fields.

“Born and raised in Gosford on the NSW Central Coast he left school and became an apprentice carpenter. After a few years, he needed a change and became a personal trainer,” said the statement on Facebook.

“It was when working for Return to Work in Newcastle that Glen met his partner of four years, Todd. The pair moved to Melbourne, which is when Glen applied to join Victoria Police.” 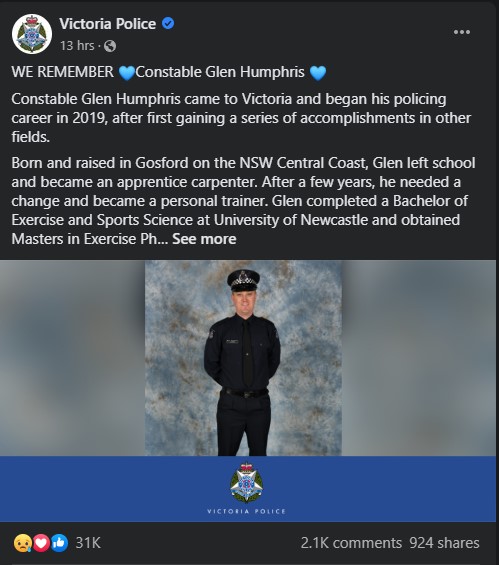 In the police academy, he performed above average, narrowly missing out on the Highest Academic Achiever Award for his squad.

His squad mates said he genuinely wanted to help people, had a great sense of community and genuine empathy for both victims and offenders.

Constable Humphris was on Thursday described as “one of a kind”.

“That smile of yours will be dearly missed.

LGBT support group Gay Sydney Australia posted a tribute on their Instagram including a message to his family and partner Todd.

Sadly one of the 4 police officers killed in the Melbourne Freeway crash was part of our ????????️‍???? community Constable Glen Humphris was remembered in a police obituary as a new recruit with a “great sense of community and genuine empathy for everyone — victim and offender alike”. Before joining the force, Constable Humphris had worked as a carpenter, personal trainer and sports scientist in New South Wales. He then moved to Melbourne with his partner, Todd, and began training at the Police Academy to become an officer — scoring near the top of his class in his exams. “Glen is remembered as being very level-headed, caring and supportive with a great sense of humour and had the ability to make light of any situation to calm people,” the obituary said. R.I.P ????️‍????????♥️???????????????????? @victoriapolice #victoriapolice #gaymelbourne #gaysydneyaustralia

Constable Humphris was based at Collingwood in Melbourne’s inner North, for placement at the Road Policing Drug and Alcohol Section. This was part of his Probationary Constable Extended Training Scheme.

The fatal incident occurred as police were attempting to arrest a driver of a Porsche that had been picked up speeding on Melbourne’s Eastern Freeway. As this was occurring on the side of the freeway, a truck driving along the emergency lane allegedly ploughed into the back of the cars and the police officers.

The driver of the Porsche escaped the scene but was arrested on Thursday while the driver of the truck is still in hospital and as yet has not been interviewed by police.