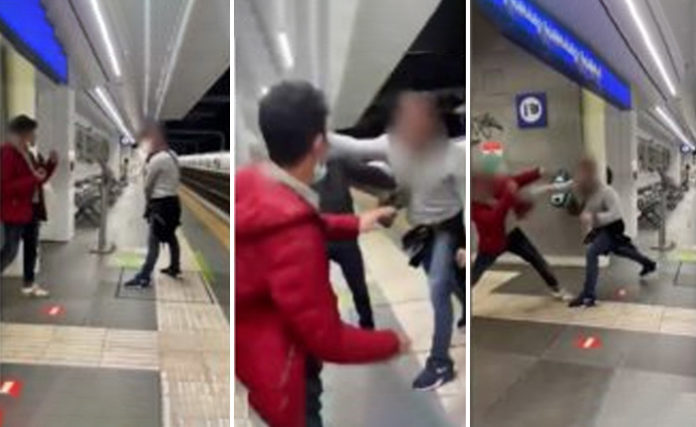 Footage has emerged of a violent homophobic attack at a train station in Rome which as seen a man cross train tracks to physically assault two men who were holding hands and kissing.

The incident which took place in late February but has only been recently shown extensively across Italian media to assist with legal proceedings was against young activist and refugee of Latin American origin Christopher Jeanne Pierre Moreno and his partner.

At around 9 pm on a Friday night at the Roman station of Valle Aurelia, the two were attacked by a stranger who kicked and punched the pair while the incident was being filmed.

Speaking with Italian news service Gaynews Moreno said the couple had just celebrated his birthday with a friend.

“We were waiting for the last train to go home,” said Moreno, “while I was kissing my partner, we suddenly heard a man scream from the platform opposite: ‘What are you doing? Aren’t you ashamed?’.

“After replying: But what do you care? and having resumed kissing with my partner, the guy crossed the tracks and joined us, first striking my partner in the eye. “Frightened, he tried to take me away and then fled. But I stayed there, not being afraid to face him and continuing to ask him what problems he was having.”

The shocking video footage shows the man taking a boxing pose and looking like an amateur UFC fighter to take on the gay man.

When the attacker bent over the rails to grab stones and throw them at them, the two boys reacted in the same way and threatened to call the police. At that point, the man fled to the underpass and then boarded the waiting train. The next day Jean Pierre went to the hospital to have a medical report and, on Sunday, to a police station to file a complaint.

As Rosario Coco, representative of Gaynet Roma, of which the young refugee is a member said “the process with the police was not easy. The police struggled to understand the homophobic motive and integration of the complaint was needed to put on paper the request to retrieve the videos of the security cameras, which would prove the dynamics of the facts. We currently do not know yet if the images will be recovered, as they are destroyed every 7 days and these steps have resulted in a significant waste of time. We now await the public prosecutor’s pronouncement on what happened, hoping that everything possible will be done to identify the aggressor and to classify this crime in the best possible way according to the current legal instruments.”

The mayor of Rome, Virginia Raji, and the governor of Lazio (the wider region of the Italian capital), Nicola Gingaretti, immediately expressed their full support for the couple, adding that discrimination and violence must end once and for all.

From the centre-right, at the same time, Forza Italia and Lega characterize the images of the attack as “inconceivable”, while the super-conservative party Adelfia of Italy makes it known that “this is shocking violence”.

The centre-left Democratic Party and the Five Stars, at the same time, demanded the immediate adoption of a law against homophobia, while the League continues to not consider it necessary.

“We want to say that we need respect for everyone because the word tolerance is often misunderstood, as some people think it is a matter of grace and concession,” one of the two young men who fell victim to the attack told Rai TV.