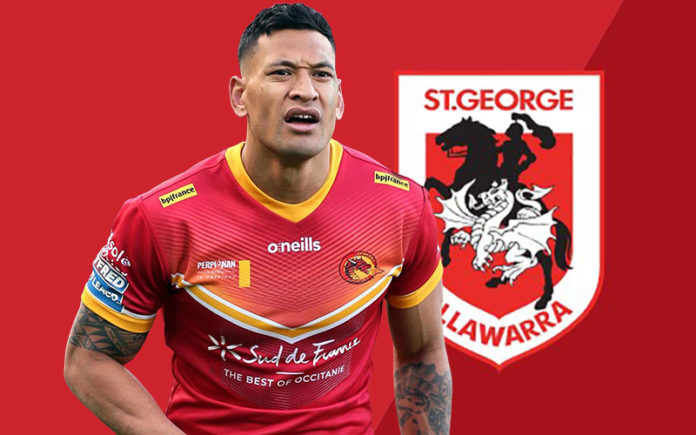 Following an expected backlash and ‘shitstorm’ that would come with Israel Folau returning to rugby league in Sydney, the St George Illawarra Dragons have decided to pull out of discussions to sign the player before the issue was to be discussed by the NRL.

In a short statement provided by the club late following an extraordinary general meeting on Wednesday night, the club has acknowledged they were in discussions with Folau but said that those talks had now ceased.

“While the Dragons did enquire about signing Folau, the club can confirm that such discussions have now ceased,” the statement said.

All this came at the end of a tumultuous day when the NRL executive claimed it would afford Folau “due process” and “natural justice” in any discussions and decisions. But the writing was on the wall early that there was no public interest in him returning to the game.

Former rugby league star and the first player to come out as gay Ian Roberts, told the Sydney Morning Herald that he thought the decision to hire Folau would be a bad one.

“At what point did someone at the Dragons think it would be a good idea to invite this shitstorm into their club?” Roberts asked when speaking to the Sydney Morning Herald.

“And that’s what it will be. You are welcoming this hurricane of offal. I would’ve thought the board and the coach could look at their position in rugby league, because this is about more than winning or losing.

“It’s about the actual fabric of the game. Who thought this was a good idea? It’s mind-blowing.”

French club Catalans, where Folau has still a year to run on his contract, came out publicly yesterday rubbishing claims he would return to Australia.

Catalans coach Steve McNamara released a statement on the club’s website saying he doesn’t normally react to things but this is absolute rubbish.

“People have suggested that he’s simply not returned to France and made no contact with the club and it’s the complete opposite,” McNamara said, “He’s got a serious family situation back home in Australia and from day one of that situation arising, he has been in contact with us.

“That’s where we are currently at and there has been no change in the situation. It’s a personal thing and we are giving him whatever time he needs.”