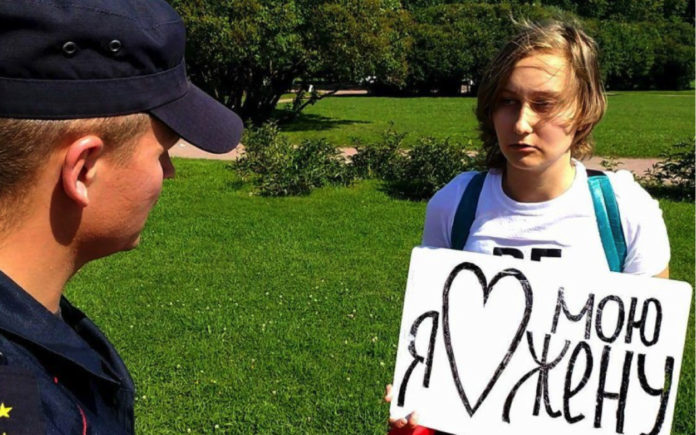 A Russian LGBTI activist has been detained by police during a recent St Petersburg Pride event, leaving fellow activists concerned about their peer’s safety.

Anna Grabetskaya who was detained on Saturday following her solitary picket at an event which was impaired by both far-right and pro-government protestors.

Reported to be holding rainbow flag and a poster saying “I love my wife,” Grabetskaya was detained by police shortly after taking her stand.

by The Russian LGBT Network has  that Grabetskaya She was holding rainbow flag and a poster saying ‘I love my wife’. After she tried to take a few steps police detained her.

Grabetskaya who is a volunteer at the LGBT Network’s crisis hotline could face up to 10 days in detention with local police stating that the long-time LGBTI activist ignored their warnings after she was given “10 minutes to cease her unlawful actions.”

Despite Russia’s “gay propoganda” legeslation, anti-LGBTI protest groups and a strong police presence, organisers claim that this year’s St Petersburg Pride Event was one of its biggest and best, with over 100 people showing thier support.

“Everyone has his own reason to come to the pride,” Sveta, an LGBTI activist explained to the Moscow Times.

“Many of my friends didn’t come because they were afraid to be discriminated at work, to lose their job or get expelled from university.”