Married at First Sight Australia’s Liam Cooper has launched a scathing attack on media outlets News Corp and Daily Mail for claiming red carpet pictures with former New Zealand MAFS star Samuel Levi on the weekend meant the two were dating given Cooper came out as bisexual in this year’s show and Levi is openly gay.

The pictures of the two appeared first in the Daily Mail and then in the Herald Sun newspaper on Sunday and both articles labelled Cooper as the “MAFS bisexual groom” and that it looked like he was getting on well with Levi.

“The country boy, who revealed he’s bisexual to Georgia on the show, looked to be getting on very well with Married At First Sight New Zealand star Samuel Levi,” The Daily Mail reported.

“The pair shared a hug while posing for photos on the media wall.”

The report even suggested someone at the event thought they might be dating.

In an updated version of the story, Cooper was quoted as saying, “I can confirm Samuel and I are not dating. We are just mates. I think it’s sad that two guys from the LGBTQIA+ Community can not be seen out without people saying we are in a relationship, this wouldn’t happen if we were straight,’ he said.

The Herald Sun story suggested the two “looked extremely comfortable in each others company.”

In social media posts following the articles being published Cooper has said he is disgusted how the media outlets have made the story all about him being bisexual and that he should be allowed to stand next to another male at an event without it being suggested that he is dating.

“@Dailymailau you changed your article after you messaged me but yet you still felt the need to write “bisexual” groom. Sorry what year is it,” Cooper said on Instagram. 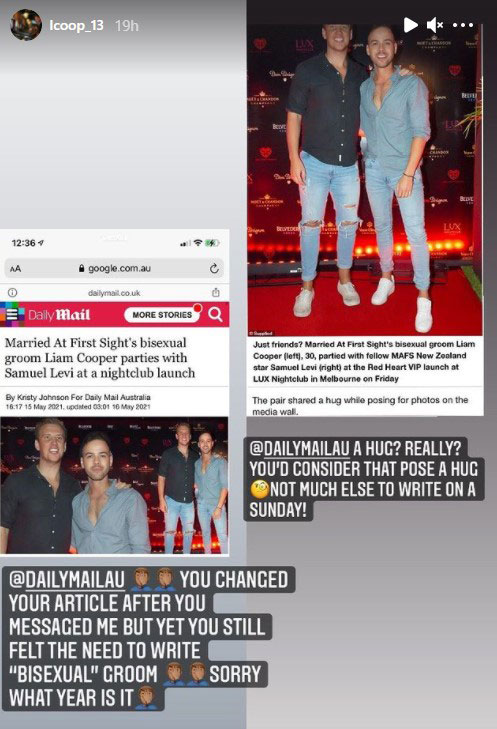 “@msfionabyrne do you write articles saying MAFS “straight” contestant… or do you just feel the need to label me? I am more than a label! My sexuality shouldn’t have to do with me finding love or anything to that matter,” Cooper wrote on another story. 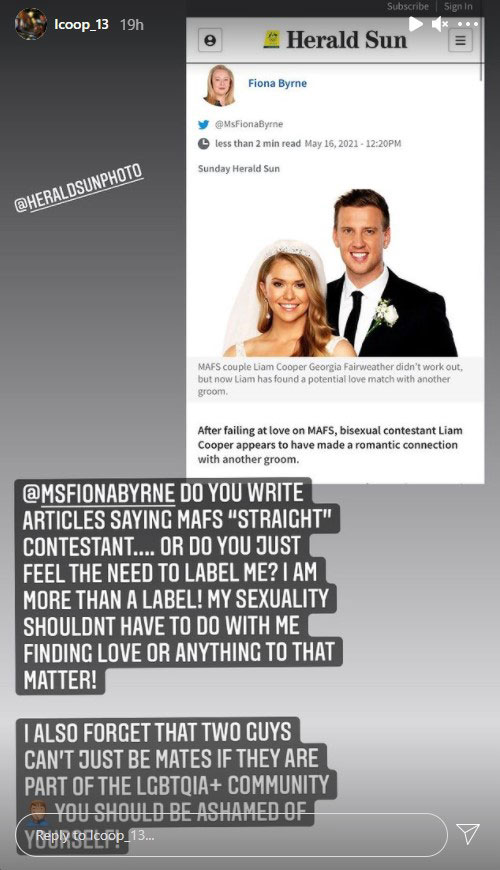 “I also forget that two guys can’t just be mates if they are part of the LGBTQIA+ community. You should be ashamed of yourself.”

In a further Instagram post, Cooper has again made it clear being bisexual doesn’t define who he is and showed the middle finger to all of his detractors.

“I’ve always hated labels. I hate having to say I’m bisexual and that’s not because I am embarrassed or anything like that, it’s because I believe it’s no ones business but your own! It does not change you as a person, As a sister, as a brother, as a friend, nor a cousin!

“No one has the right to judge you and that’s for everyone (straight, bi, gay, trans) you name it, everyone deserves to be happy and treated equally and respected! If you as person can not accept anyone for who they are without prying into their life, because they want answers!

“I am LIAM COOPER, I am not “LIAM COOPER the bisexual” I feel sorry for those people! Maybe you should get a hobby and mind your own business!”

In the 2021 season of MAFS Cooper tied the knot to Georgia and then later revealed to his bride that he’s openly bisexual. This wasn’t an issue for the bubbly and open-minded Georgia, but it seems it is for some sections of the Australian media.