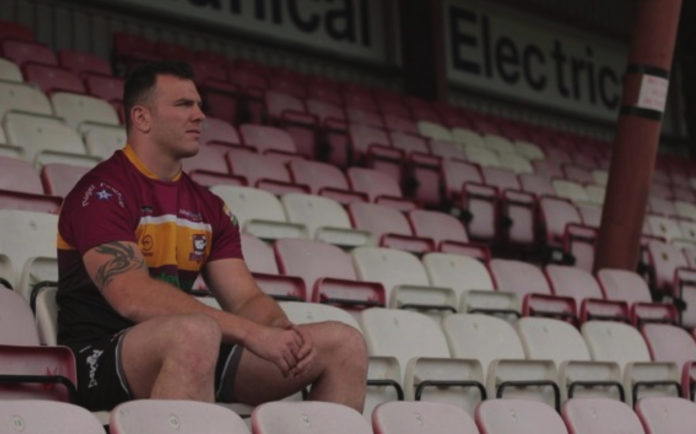 Rugby League Star Keegan Hirst, who made history by becoming the first openly gay professional British Rugby League player has revealed that he knows of many other professional sportsmen who are waiting to come out.

Speaking with Gay Star News Keegan Hirst who captains the Batley Bulldogs says closeted athletes from different sports have asked him for advice on being openly gay.

After coming out in 2015, Hirst says that the past 18 months since coming out have been “life-changing.”

Despite the positivity Hirst has encountered, Hirst also says that he would “never encourage anyone to come out” before they were ready.

“I’ve had conversations with guys, and I’ve given advice. I’ve said how I found it. There have been a few guys from a few different sports.”

Hirst adds, “It’s a personal thing, we’ve got to make it a good environment for someone to come out before it can actually happen.”

Ready the full interview with Keegan Hirst below:

What has the last 18 months been like for you?

It’s been great. The support I had from teammates, friends and from strangers and fans, it’s been amazing. I’m really happy I wish I’d done it sooner.

What did you think the reaction would be when you did come out?

You fear the worst, you make up scenarios. I thought I wouldn’t be able to play rugby anymore. People would disown me, I thought I wouldn’t see friends and family. In that moment, you’re scared and you feel isolated. But that’s what I was going through. When I did it, the relief. It was totally unfounded. I was terrified.

Have you had any negative reactions?

By and large no. There was a fan of the club that tweeted me that ended up getting a lifetime ban. But it’s all been really positive.

How was it telling the kids?

It was alright. Kids are kids. Kids are taught to discriminate they don’t do it on their own. My son is too young to understand. My daughter’s 8 years old. She’s a bright girl. She knows what it is to be gay. She’s fine it, it doesn’t affect her.

How was Manchester Pride after you came out?

I went the week after I came out, and it was amazing. It was such a great reaction. I’ll never forget the young families in the crowd, the straight people who didn’t have to be there but wanted to be there and showed their support. It gave me a lot of pride and comfort in people in general. There were those who were to support me. Manchester Pride will always have a special place in my heart because of that.’

It’s just dating. I’ve been in relationships since I was 18 years old. Being a bit more well known makes me a bit more nervous, but it is what it is. It’s hard to meet new people.

Have you spoken to any closeted gay sportsmen?

I’ve had conversations with guys, and I’ve given advice. I’ve said how I found it. There’s been a few guys from a few different sports.

Do you think there is more pressure on people to stay closeted in sports?

I think it is. It’s a lot more focused on football players, probably because there’s a lot more money involved. While it shouldn’t matter who you date, it does. There’s also a big following in football. There’s a big call for people to come out, but it’s a personal thing. We’ve got to make it a good environment for someone to come out before it can actually happen.

What advice have you given to sportsmen in the closet?

You’ve just got to be in the right frame of mind. It doesn’t matter if you’re a sporstman or Joe Bloggs who works 9 to 5. You’ve got to be comfortable in your own skin. And have a good people around you. Do it when you’re ready to do it.

How has your own life changed since coming out?

It’s changed completely. People talk about life-changing, but I look at my life 18 months ago. I was married, I was working as a builder, I was just plodding along. I’ve come out and I’m a lot happier in myself.

People are scared things will get worse or lose things. I’ve gained things and things have got better coming out. It’s spring-boarded me into more work, and it’s just been amazing for me. Obviously it depends on individual circumstances. People don’t always have good experiences, so that’s why it’s not fair to encourage people to come out. But it’s the best thing I’ve ever done. I’m really proud.