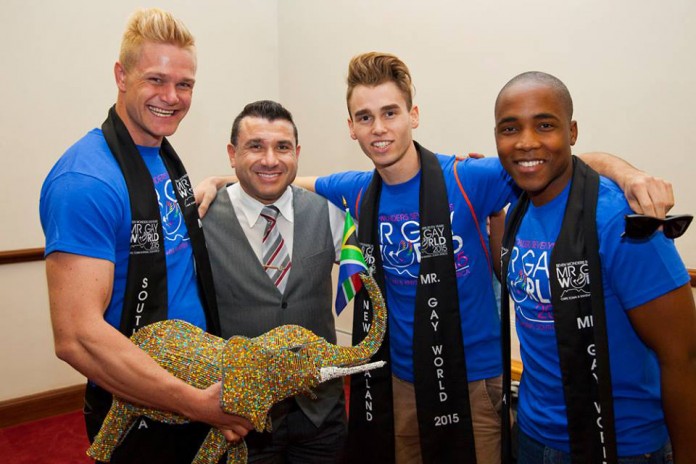 Mr Gay New Zealand, Matt Fistonich has tasted wine, visited pre-school children, held the monkeys and looked his best at the masquerade ball to be ready for the final weekend of the Mr Gay World competition which culminates in the announcement at the Mr Gay World Finale on Sunday morning New Zealand time.

Throughout the week Mr Gay World delegates have traversed South Africa visiting many historical venues, meeting political leaders, spending time with local children and taking in some of the tourist attractions.

The Mr Gay World competition aims to develop LGBT leaders who can take the messages of diversity, inclusion and equality to the worldwide community.

During the week delegates have also appeared on Sth African television, hit the newspapers and become local celebrities in Cape Town and Knysna.

The finale weekend of Mr Gay World coincides with the annual Pink Loerie Pride Festival in Knysna which will see all delegates appear in the annual street parade wearing their National Uniform, Matt will be wearing the All Blacks Uniform kindly donated by the All Blacks.

As part of the judging of the competition, all delegates took part in a art design challenge. Matt Fistonich designed a piece that he thought best described New Zealand and its tolerance of the LGBTI community.

“It’s a map of New Zealand made out of “koru”s in the GLTBI Rainbow colours to show the diversity and inclusiveness of NZ and the GLTBI community.

“The bright colours on the koru are inhibited by the charcoal surround to symbolise intolerance and homophobia.”

Matt’s artwork has been judged and will form part of the overall decision at the finale.

The announcement of the winner will take place at a gala event in the centre of Knysna and begins at around 5.30am New Zealand time on Sunday morning. with an announcement expected sometime around 8.30am.

Eikon will be updating the Mr Gay New Zealand page throughout the event and as soon as we have the winner it will be announced here on Eikon.

Matt would like to thank his incredible partners for this wonderful opportunity including Principal Partner Wireless Nation and partners New Zealand Aids Foundation, Eikon, The Tanning Room and French83.