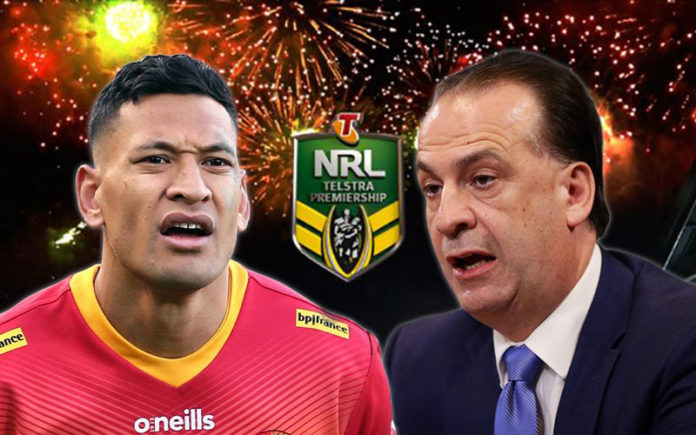 Australia’s National Rugby League Chairman is on a collision course with one of their franchise clubs after the St George Dragons requested to include Israel Folau in their 2021 squad and see him return to Australian sport for the first time since his disgraced sacking over homophobic statements in 2019.

ARLC Chairman Peter V’landys is on record as saying he would not support a move to have Folau back in the game if it put young people at risk following Folau’s homophobic outbursts that saw him pushed out of Rugby Union and having to play in France.

“The game is inclusive. Israel’s comments are not inclusive,” V’landys said in 2019.

“When I was a kid and kids used to get bashed up because they were different, I used to go and defend them. And a lot of them, it’s because their role models or their peers made them that way.

“I have no tolerance for people that put other people’s lives (at risk) or (commit) violence. It’s a big statement to make. With due respect to Israel, what he says, young kids listen to. He is a role model. They act on it. And when you’re a kid at school and you get bashed up because you’re different, I don’t think that’s a good thing.”

After making such a tough stance V’landys would be very unlikely to allow Folau back into the game if he thought his comments would again put young fans at risk.

Australian not-for-profit Pride in Sport has come out today and hit back at the club’s application saying that Folau’s views, “do not reflect the standards and expectations that exist today in Australia.”

“His past statements about LGBTQ communities work in direct opposition to the significant progress on acceptance and inclusion that is being made by sporting codes, clubs and organisations across the country,” says co-founder of the Pride In Sport Index, Andrew Purchas OAM.

“If the St George Illawarra Dragons go down this path, there is an expectation that there will be a zero-tolerance policy on harassment and discrimination against LGBTQ people.”

“Further, if Mr Folau’s appointment as a player eventuates, he must abide by NRL’s policies on diversity and inclusion, and we encourage the Dragons to have in place strategies that will ensure best practice deliverables around LGBTQ inclusion policy, education, visibility, and cultural safety.”

“NRL is a code that prides itself as being a sport for everyone with strong values of diversity and inclusion,” Purchas added.

“Sporting clubs must take a stand against homophobia, biphobia and transphobia when it happens and send a clear message to all Australians that discriminatory words and deeds will not be tolerated,” he concluded.