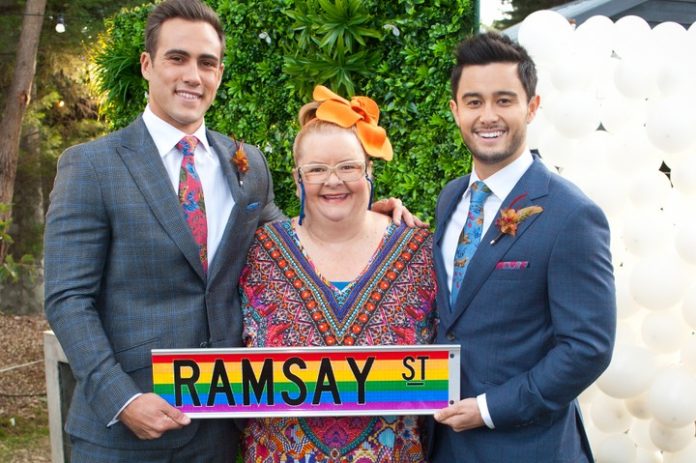 The engagement has only just aired, but today it was confirmed that Australia will get its first same-sex TV wedding when Aaron and David marry on Neighbours.

Planned to air on September 3, filming of the wedding has occurred this week on the set of Neighbours at the Network Ten studios in Melbourne.

Actors Matt Wilson(Aaron) and Takaya Honda (David) have released shots on their social media to show that the wedding actually happened.

Actress Magda Szubanski played the role of the celebrant at the wedding. 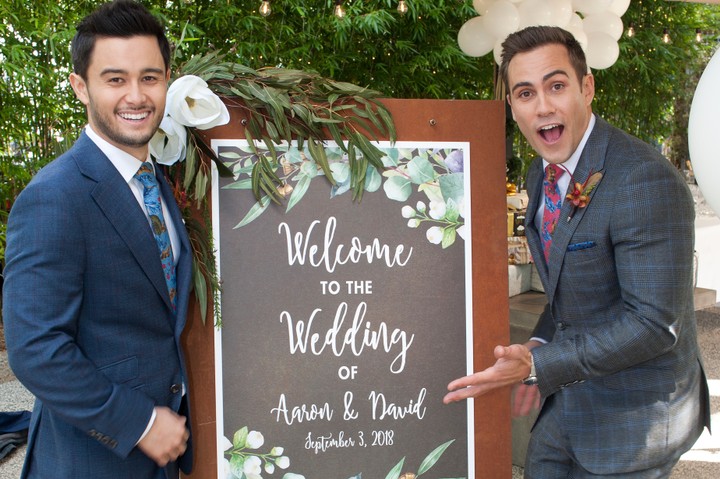 Speaking on social media, Wilson said the event was an historic moment for Neighbours and Australian TV.

“We are both ecstatic to be part of this huge moment and it stands alone as the highlight of my career,” said Wilson.

“This storyline means a lot to me, my friends and to all the fans who love Aaron and David.”

Takaya Honda added that he and Wilson were so proud to play these characters and could not be happier with the overwhelming and positive response they have had to the relationship.

“It is an absolute privilege to be part of what is and what will be a historic moment in Australian television,” Honda said.

“There have been so many parts of David’s story that have given me a great sense of pride – from discovering Paul Robinson was his dad, to his coming out to now marrying the man of his dreams.”

What a day! Working with one of Australia’s favorites TV icons, the incomparable @magda_szubanski, on an historic event in Australian Television – the first legal same sex marriage on an Australian drama, alongside the greatest partner in crime @mattywilson all while being quite sick. Fortunately for me I had the @Neighbours crew whom without I could not have survived. We have worked so hard on this and I can’t wait for you all to see it, it is going to meet and surpass all your dreams, if not only because of Magda’s incredible talent. Thank you to @kd.publicity and the rest of the Network Ten and Neighbours publicity team. To all the journos who came to help document this occasion @candice_wyatt_10 @nataliejhunter @studio10au @tvweekmag @jmoconfidential and those who I don’t know a tag for. Thank you for helping celebrate. And finally thank you to all the fans out there who have barracked for #Daaron !! Without your support this would not be happening. Matty and I are so proud to play these characters and we could not be happier with the overwhelming and positive response you have had to the relationship, so thank you thank you thank you! #3monthsandcounting

The wedding will appear on Australian and UK screens on September 3.