Out British singer Olly Alexander has held a ripped rainbow flag as part of a campaign to highlight the LGBTIQ+ community’s heightened risk of suicide on World Suicide Prevention Day.

The lead singer of synth-pop band Years & Years has more than 478,000 Instagram followers and has been a strong LGBTQ+ activist for many years.

The 28-year-old said there was such a stigma around mental health but that shouldn’t stop us from speaking out about it.

“In the workplace, in education, or even at home, it can feel difficult to express what you’re going through in the first place,” said Alexander.

“Tackling that stigma is one part of it. I also think we have to have the actual services and provisions for LGBTQ people, because they are quite slim on the ground.”

The campaign centres around a ceremonial version of the iconic pride flag which has 2 of the 6 stripes removed in order to represent the 2 in 6 LGBTIQ+ young people at risk of being lost to suicide in the UK due to issues including bullying, discrimination, gender identity and mental health.

This powerful statement is made all the more poignant because the lost red and blue stripes traditionally symbolise ‘Life’ and ‘Harmony’.

The “Flag We Shouldn’t Be Proud Of” campaign was created by The Gate London agency for Gay Times Magazine and the Switchboard LGBTIQ+ telephone helpline to mark the important day.

Australian LGBTIQ+ Support details are below. 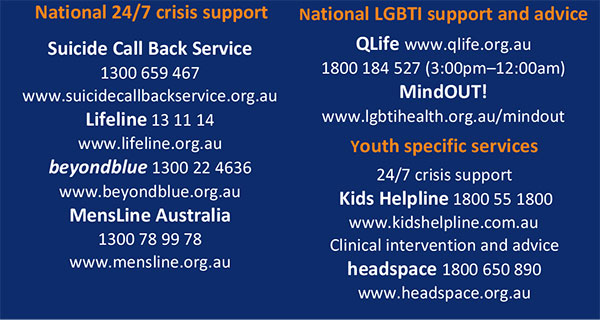