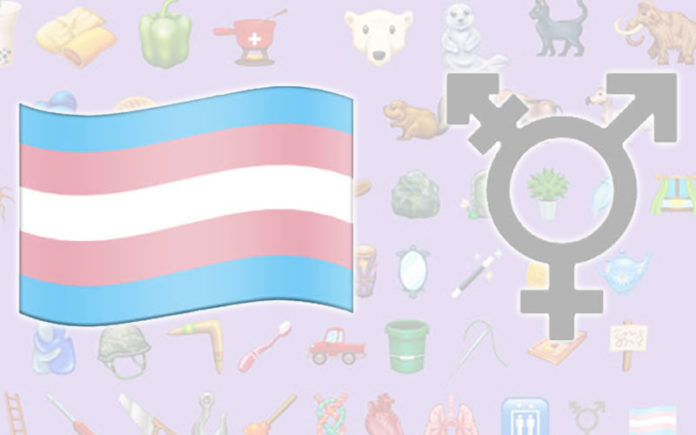 A new transgender flag emoji is one of a range of brand new gender-inclusive emojis that have been announced for release in 2020.

The governing body of the emoji, Unicode Consortium, this week announced the release of Emoji 13.0, and with it, 117 new emoji.

The expansion features 62 brand-new emoji, as well as 55 new gender and skin-tone variants, many of which are gender-inclusive.

The new transgender flag emoji was created and submitted to the list by a Google and Microsoft co-sponsorship.

The 2020 emoji alumni reflect the trend over recent years toward more inclusive and representative options following the 2019 additions that included a hearing aid, a wheelchair, a prosthetic arm, and a seeing-eye dog, as well as a gender-neutral couple and an increased number of skin tone options.

This year’s emojis also features an increased focus on empathy, with new Google-suggested emoji depicting two people hugging and a slightly smiling face with tear (a response to user requests for an emoji which expresses both appreciation and relief).

Tech giant Google sponsored five of this year’s new emoji, with several of the more inclusive options among them, such as a person in veil and person in tuxedo emoji, and a range of skin-tone variants which now include people who present as male, female, and non-binary – including a gender-neutral Santa Claus.

Among other new emoji, selections are a ninja, a black cat, a woolly mammoth, a polar bear, a dodo, bubble tea, blueberries, an olive, a tamale, a teapot, a piñata, a boomerang, a mousetrap, a headstone, and an anatomical heart and lungs.

The new emoji are listed with sample images. These images are just samples: vendors for mobile phones, PCs, and web platforms will typically use different images.

You can watch a video introducing the new emoji at your gay nation below.