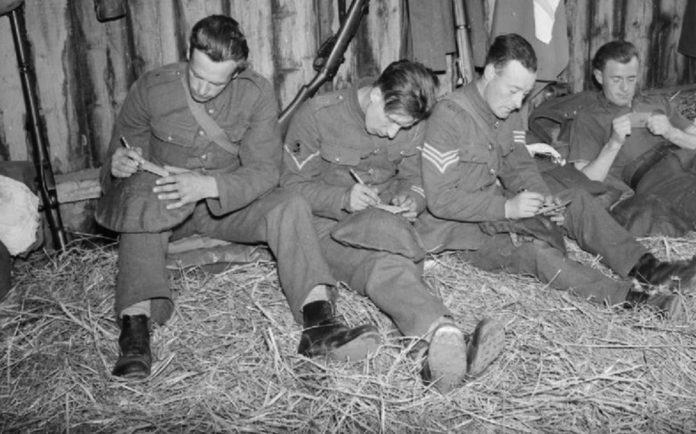 Hundreds of love letters have been discovered between two young men caught up in the second world war.

Despite homosexuality being illegal at the time, Gilbert Bradley and his lover Gordon Bowsher exchanged hundreds of letters risking, ultimately risking their freedom and livelihoods should the pair be caught.

For service personal, gay activity was a court-martial offence, with punishments ranging from jail sentences for so-called “gross indecency” and even death should armed forces personnel be caught in same-sex sexual activities.

The letters which have only recently emerged following the passing of Bradley in 2008, highlight and shed an important light on homosexual relationships during the second world war.

Bradley, the reluctant soldier who did not want to be in the Army was an anti-aircraft gunner and had met Bowsher on a houseboat holiday prior to the war in Devon in 1938.

Mark Hignett, of Oswestry Town Museum, purchased hundreds of Bradley and Bowsher’s letters for thousands of pounds, to enable the public to view the heartfelt collection.

“There is a gay history and it isn’t always negative and tearful. But despite all the awful circumstances, gay men and lesbians managed to rise above it all and have fascinating and good lives despite everything,” Roscoe explained.

Similarly to one line from the collection: “Wouldn’t it be wonderful if all our letters could be published in the future in a more enlightened time. Then all the world could see how in love we are,” work on a book is already under way at the museum, where the letters will also go on display for the general public to view.

In the UK it was not until the Sexual Offences Act of 1967 that consenting men aged 21 and over were legally allowed to have homosexual relationships. Disturbingly being openly gay in the UK armed services was not allowed until the year 2000.