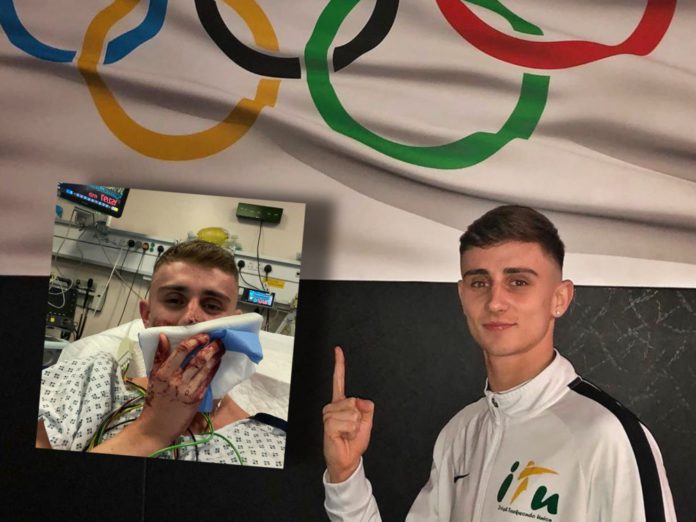 Openly Bisexual Irish Olympian Jack Woolley has been left battered and requiring facial reconstructive surgery after he was attacked by a gang of 12 people during a night out with friends in Dublin.

Woolley who is Ireland’s first Olympic representative in taekwondo explained via a graphic Instagram post how he was attacked “out of the blue” on Saturday the 14th of August.
Sharing images from inside an ambulance and a hospital bed, the 22-year-old posted his blood-soaked clothing and lacerations across his face, that he received from the attackers.

“Heading back along the River Liffey a gang of roughy 8-12 men and women in their 20s began violently attacking people along the boardwalk,” he explained on Instagram.

“Unfortunately, I was victim to these random attacks as I was just walking by before I was punched in the face by one of these group members.”

“Then they continued to run off down the road attacking more civilians minding their own business,” Woolley added.

“Luckily I was able to phone an ambulance and stay conscious. My friends helped me throughout all over this and I’m glad to say they both are well and safe. I am lucky this is all that happened as there were a handful of us hospitalised.”

“Thank you all again for the support and kind messages. I hope for a speedy recovery. It’s been a tough couple of months,” he concluded.

Following the attack, Woolley was rushed to St James’s Hospital.

Speaking to the Irish Independent Gardaí, the state police force, confirmed that officers had attended the scene of an assault that occurred on Grattan Bridge, at approximately 12.40 am.

“One man, aged in his 20s, was conveyed to St James’s Hospital for treatment of non-life-threatening injuries sustained during the incident,” officials said.

“No arrests have been made. Investigations are ongoing.”