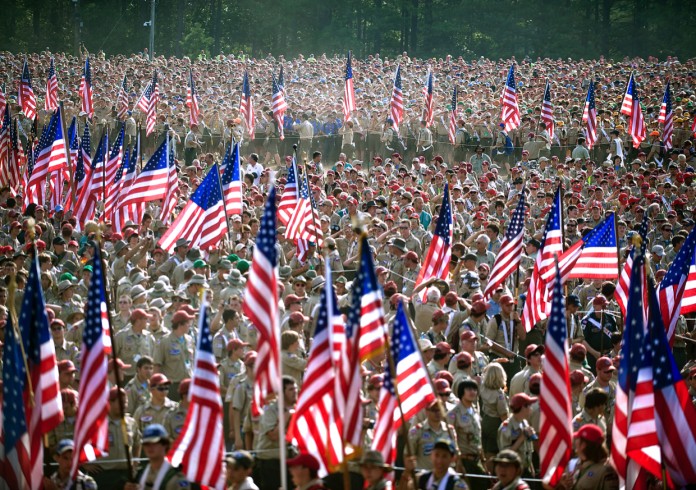 The Boy Scouts of America (BSA) have made history today by voting to end its outright ban on gay scout leaders.

In June 2015, the National Committee of the Boy Scouts of America unanimously approved a resolution allowing openly gay and bisexual adults to serve as employees and volunteers.

The new resolution has now officially been ratified by the BSA’s governing body, after a vote today.

Based on the BSA’s documents, the change will:

The changes are effective immediately.

At the time the new resolution was passed, Zach Wahls, an Eagle Scout and the Executive Director of Scouts for Equality, praised the development.

‘For decades, the Boy Scouts of America’s ban on gay adults has stood as a towering example of explicit, institutional homophobia in one of America’s most important and recognizable civic organizations.’

However, even if the outright ban is lifted, unfortunately it does not mean that gay Scout leaders will be welcome in all groups. The change in policy would still allow Christian chartered groups to choose leaders ‘whose beliefs are consistent with their own.’

‘There are differences of opinion, and we need to be respectful of them,’ said Michael Harrison, a businessman and advocate of change who led the Boy Scouts in Orange County, California, to the New York Times.

‘It doesn’t mean the Mormons have to pick a gay scoutmaster, but please don’t tell the Unitarians they can’t.’

The outright ban on Gay Scout Leaders by the US Scout movement has been increasingly criticized in recent years. In 2013, it finally removed the ban on gay youths becoming scouts, but sadly the ban on adults remained.

In May 2015, former Defense Secretary Robert M. Gates, who is now the volunteer President of the Boy Scouts of America, stated that the ban on gay adults ‘cannot be sustained.’

As well as voting to remove the ban on gay leaders, the governing body has also voted on ending discrimination based on sexual orientation in all official scouting facilities and paying jobs across the country, possibly to avoid the possibility of potential lawsuits in the future.

In Washington today, Scouts for Equality, the national organization leading the campaign to end discrimination in the Boy Scouts of America, praised today’s historic vote by the BSA’s National Executive Board to end the organization’s decades-old ban on gay adults.

“This vote marks the beginning of a new chapter for the Boy Scouts of America,” said Zach Wahls, the Executive Director of Scouts for Equality.”

“Tens of thousands of people came together because they wanted to build a better future for the Boy Scouts of America, and that future starts today.”

“I couldn’t be more proud of the tireless work of our members, volunteers, and staff over these last three years. As of today, the Boy Scouts of America is an organization that is looking forward, not back.”

“We’re calling on gay Eagle Scouts, parents who are straight allies, non-profit organizations who support LGBT equality and anyone else who has walked away from the Boy Scouts to rejoin the fold,” continued Wahls. “Together, we can build a stronger, more inclusive Scouting movement.”