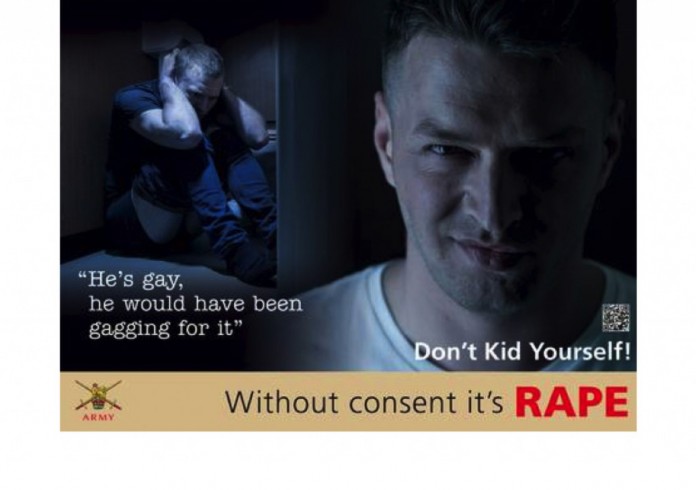 The British Army and The Ministry of Defence (MOD) has launched a new advertising campaign targeting sexual harassment and specifically gay rape.

The campaign features series of posters including one with a man sitting on the floor of a bathroom with the caption: “He’s gay, he would have been gagging for it”, as well as a woman in a bar which reads “… she was asking for it.”

The posters feature men and women who have been depicted as being raped alongside the slogan “Don’t kid yourself! Without consent it’s RAPE.”

The recently released report found that almost fifty percent of recruits think that sexual harassment is a problem within the army.

There have been over 400 cases of military rape or sexual assault in the last five years, although this figure does not include any cases investigated by the civilian police force. This figure therefore under-represents the full scale of the problem.

Another report released warned that at times sexual offences are not reported to the Royal Military Police, and therefore go completely unreported.

With almost four out of ten female soldiers suffering sexual comments in the past year, General Sir Nick Carter has described these figures as “totally unacceptable” and was part of a “problem of culture.”

The new Without consent it’s RAPE campaign was developed in consultation with Stonewall and Rape Crisis.

A spokesperson for Rape Crisis England and Wales said that the group are “particularly pleased that the campaign is clearly addressed towards perpetrators and potential perpetrators of sexual offences, as opposed to victims and potential victims, as this places responsibility for these crimes unambiguously where it belongs.”