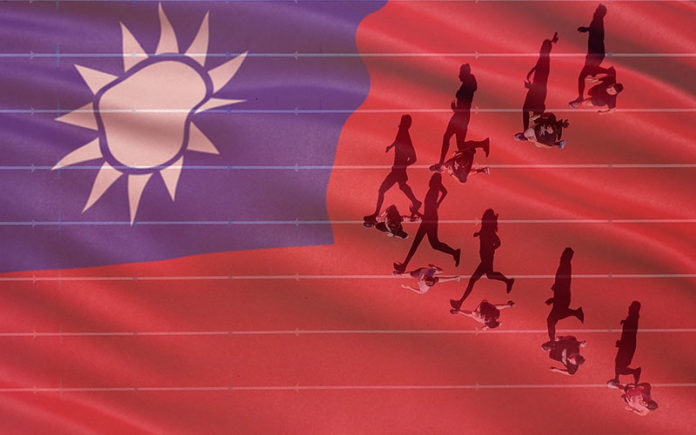 China is attempting to prevent Gay Games athletes from Taiwan from displaying their own national flag at the international LGBT sports competition which gets underway in Paris on Saturday.

In a statement from the Federation of Gay Games on July 25 participants are reminded about the ways they can show pride in their teams and countries.

The cautiously worded statement came two days after Agence France-Presse reported that Yang Chih-Chun, president of the Taiwan Gay Sports Development Movement Association, accused China of attempting to pressure the French government and the FGG into banning the display of the Taiwan flag at Gay Games events.

According to the AFP story, which was published in several newspapers in Asia, including the Taiwan News, Yang said his group was notified one week earlier by the FGG that the French government had “expressed concerns” over displaying the Taiwanese flag.

“Our logical conclusion is that China protests to the French government or otherwise this would not have happened,” AFP quoted Yang as saying.

“We hope the FGG can resist pressure,” AFP quoted him as saying.

An FGG spokesperson has since spoken with the Washington Blade on July 28 and said the French government has not asked the FGG or the Paris Gay Games host organization to place any restrictions on the display of the Taiwan flag.

China has considered Taiwan to be a part of the nation of mainland China since 1949 when leaders of the then Republic of China fled to the island of Taiwan after losing a civil war to the communist revolution led by Mao Zedong, whose People’s Republic of China gained full control of the mainland.

In the years since then, China has tolerated Taiwan’s separate government but has insisted it be considered a territory of China and has threatened military action in recent years if Taiwan becomes overly aggressive in exercising its independence.

China’s sensitivity over Taiwan surfaced in another way recently when Air New Zealand and Qantas became the latest in a long list of international airline companies to accede to China’s demand that they stop listing Taiwan as a separate country in their flight schedules and websites.

Both websites now are displaying the country as part of China.

With that as a backdrop, separate contingents of 69 LGBT athletes from China, 50 from Hong Kong, and 28 from Taiwan were expected to arrive in France to participate in the Gay Games. The FGG last year chose Hong Kong as the host city for the 2022 Gay Games, marking the first time the Gay Games will be held in Asia.

Although Agence France-Presse reports that the Taiwanese contingent requested in their application to participate in the Gay Games that they are listed as being from their “country” of Taiwan, the FGG has listed their place of origin as “Taipei,” Taiwan’s capital city.

“Recent events regarding participants from Taiwan and China have elevated the need for the Federation of Gay Games (FGG) to state its position on matters at hand regarding nationality, ethnic origin and political beliefs,” the FGG statement says.

The statement notes that 10,317 participants from 91 countries would be arriving in Paris this week to compete in 36 sports, 14 cultural events, and an academic conference.

“It is a fundamental principle of the FGG that all activities conducted shall be inclusive in nature, and that no individual shall be excluded from participating on the basis of sexual orientation, gender, race, religion, athletic/artistic ability, physical challenge, age, health status, nationality, ethnic origin, or political belief(s),” the statement says.

“No flags are provided to participants in any events, and no national hymns are played during regular events; the exception being host country national anthems at the opening ceremony,” the statement continues.

In what appears to be its cautious comment on the Taiwan flag dispute, the statement says, “Individuals from all over the world bring various ways to show their individual, team, local and regional pride throughout the Gay Games.” It adds that during the Gay Games.