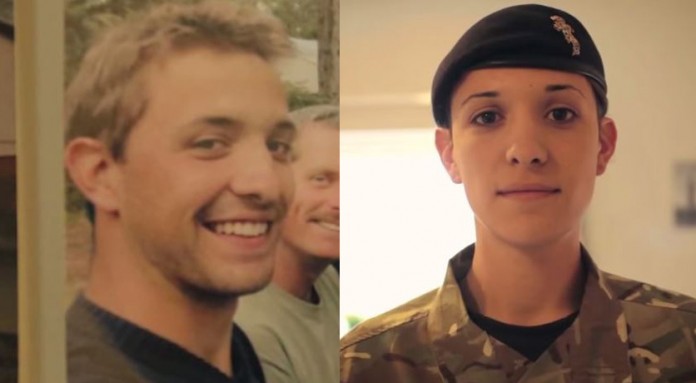 A soldier serving in the British Army has become the first transgender officer.

In an exclusive interview on the BBC’s The One Show overnight, Captain Hannah Winterbourne said she was “living an act” when she decided to become a woman while on tour in Afghanistan.

Winterbourne, 27, an officer in the Royal Electrical and Mechanical Engineers, began her transition in 2013 and is now the highest ranking, openly serving, transgender soldier in the British Army.

“I think initially it was a bit of a shock to some people, they weren’t really expecting it because it’s not something you come across every day in the Army,” she said.

“The biggest misconception about being transgender is it’s some form of being gay when its actually far more about your identity you feel inside rather than your sexual preference. For example you can be transgender and straight or transgender and gay.

“However I think people soon realised that it didn’t make a difference to my job. At the end of the day I can still do all the things I could do before I transitioned.”

Before she could make the physical change she had to tell the army.

“I walked into the office knowing I was about to tell my commanding officer that i was transgender, it was so nerve racking.

“I saw him as a reprsentative of the army that was going to be anti about what I was about to say, but I couldnt have been more wrong.”

Senior army officers spoke to the BBC and said they briefed the battalion on Captain Winterbourne’s change of gender.

They did it an informal manner where everyone could air their questions and they made it was as simple as, on a Friday the soldier was to be known as sir and on the Monday she would be called mam.

All the soldiers were briefed clearly on how they are supposed to act and some of them may have found it difficult to start with but given one or two days they got used to the idea.

While many would probably think a life in the army as a transgender soldier would have it’s difficulties Winterbourne has nothing but praise for the army’s reaction.

Coming out as a trans soldier, Winterbourne has now taken on increased duties.

“One of my additional duties is that I’m the transgender representative in the British Army, which sees me dealing with education, welfare and dealing with any issues that trans soldiers may have.

A film featuring Hannah’s life was made by the Patchwork Digital Storytelling Project and has appeared online.