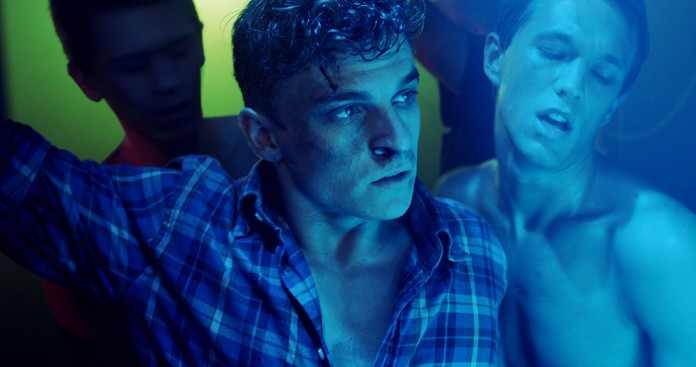 A film based on the bullying and homophobia at a surf club and starring a kiwi, is setting box office records at the 2015 Mardi Gras Film Festival… even before it opens.

The film Drown, that was adapted from the play of the same name, unfolds on a beach at night as three lifesavers face the aftermath of a big night out in the city. It tackles the tough and sometimes horrific aspects of young mean at play, violence, homophobia and drug taking.

Sydney Film-maker Dean Francis said that Drown has its confronting moments and at times will make you gasp but the audience will also be in for a fun ride.

“The film pushes style and form in ways that we haven’t seen on screen in Australia and we use hallucinogenic visuals to evoke the characters’ dreams, recollections and fantasies,” Francis said.

“It’s as much a celebration of Australian society and culture as it is a critique of it.”

The film was financed through cround funding and filmed entirely on-site at some of Sydney’s eikonic spots including Maroubra beach, Kings Cross and the famous Oxford Street gay strip.

Apart from being hounded by some roudy nightclub patrons during filming, the crew’s biggest challenge was sand.

“It’s tempting to think that shooting on a beach will be lots of fun – but its horrible! Sunburn, windburn, salt on the lens, sand in every roadcase and all over everyone. And you can’t go swimming!

“Then it rained – for what felt like weeks as we were trying to complete our gruelling night shoots at Maroubra Beach.

“In comparison, shooting in the nightclubs was easy! The challenge there was that we shot during the day when the club was closed so getting all the extras to act like they were in the midst of a big night out when it was 10am required some very loud music!”

One of the stand-out performances in Drown is a young actor who hails from Nelson in New Zealand.

“Jack Matthews plays Phil, a young newcomer to the conservative outer suburban surf club. When the reigning champion discovers he’s gay, Phil has to negotiate the fine line between staying part of the surf club pack and remaining true to himself and his boyfriend.

“Jack plays the role with great sensitivity and expresses the internal conflict with incredible depth.

“Jack is certainly one of the most exciting young actors in the country at the moment and he adds to a very long list of extraordinary talent from New Zealand!”

Francis has been heartened by the reponse to making Drown and the support he has received from the local gay community.

“We found incredible support in the community The Midnight Shift threw open their doors as a shooting location (as did Signal), Arq allowed us to fundraise on the dance floor and the Sydney Gay and Lesbian Mardi Gras granted us full access to shoot the Parade and parties.

“It was extremely encouraging and gratifying to know that when artists want to make a strong statement about sexuality and identity that the community will get involved.”

The Premiere of Drown, which screens at the Mardi Gras Film Festival is sold out and a special encore screening the following week is also close to full.

Francis said once the festival is over the film will begin showing in cinemas across Australia and New Zealand.

“We will be announcing the details of how audiences can see it at our Festival Premiere on March 4th. The film is also confirmed to release in Europe, UK and US.

For more information on drown visit the website www.drownthemovie.com

To find out more about the 2015 Mardi Gras Film Festival visit the website here.