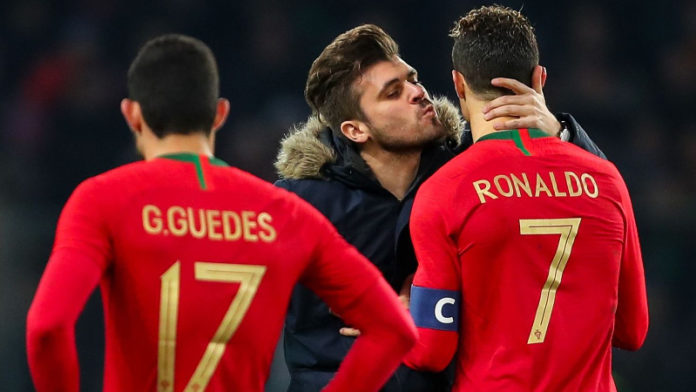 Cristiano Ronaldo’s “ease with [his] sexuality” was put on display at this week’s Portugal vs Netherlands soccer match when the 33-year-old soccer, athlete and model was planted with a kiss from a fan mid-match.

Ronaldo had an obvious focus on the game and pushed away the fan, however, the fan seemed to enjoy the moment with the athlete, as many of us would, and stayed around to get more selfies with Ronaldo.

Although the team was down 3-0 the kiss could have been the one source of encouragement Ronaldo needed to boost his spirits.

Although it was only a peck on the cheek, audiences still speculate about the soccer-player’s sexuality.

After Ronaldo’s confrontation with homophobia in 2016 during a match in Barcelona and from opponent Spanish international footballer Jorge Resurrección Merodio, his sexuality on the football field has been a significant talking piece.

However, Ronaldo’s strength in his own identity and comfortability in his sexuality is admirable to all.

Ronaldo’s sexuality and alleged relationships with men have always been in the eyes of the media.

Media speculation about his relationship with Moroccan kickboxer and his response to Merodio’s comment with “A faggot with money” has allowed audiences to contemplate if Ronaldo really is gay.

He has maintained consistency with his views and states that his sexuality should only be concern to himself and not the public.

“I’m at ease with my sexuality so it’s not a problem for me,” said Ronaldo.

Despite such claims to his homosexuality, there have been no accurate findings of this.

Ronaldo shows us that regardless of sexuality, an individual is not held back to achieve great things. Especially in such a hyper-masculine world such as football.

Unfortunately, Portugal still lost but Ronaldo’s love for his fans showed no bounds when he accepted a hug from another fan who also made his way onto the field after the phantom kisser.

Portugal lost, but I’m sure those fans feel like they’re winning.