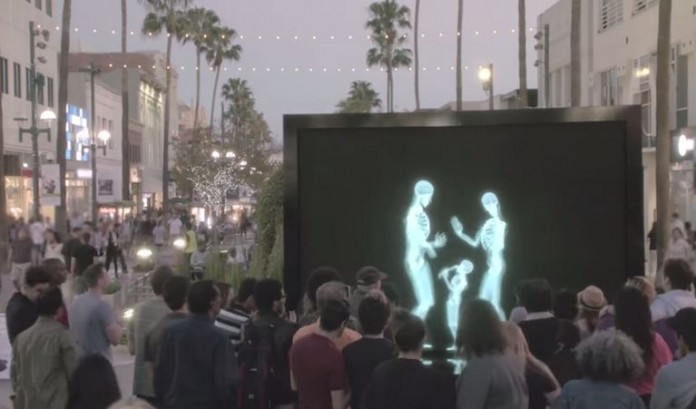 Embracing diversity and inclusion is the message behind the current video that is going viral across the world.

The Love has no labels campaign developed by the Ad Council of America shows crowds of people at Santa Monica in California USA on Valentine’s Day this year looking at a large video screen set up in the mall.

Over the day skeletons appear on the screen and move around, dance, hug, hold hands and sometimes kiss.

These images were initially more puzzling than moving to viewers. But as diverse pairings of people step out from behind the screen, the display takes on a larger meaning.

Two kissing skeletons in the first image, reveal themselves to be two women.

They step out to wave at the surprised, but receptive, audience, and kiss again.

Next, a dancing skeleton duo that turns out to be an interracial couple takes the stage.

Later on a gay couple and their son share the stage to show that families can come in many different ways. They make the comment “Our family is no less than any other family”.

In the end, people from a wide-range of identities, genders, ages, abilities and religions comes out from behind the screen. The audience celebrates each person with applause, smiles and tears.

“We decided to take this on because we felt it was very important to encourage people, all Americans, to examine their unconscious biases,” Lisa Sherman, Ad Council president and CEO, told Adweek.

“As much progress as we’ve made as a country, we absolutely still have more work to do.”

Clearly the Public Service Announcement has clearly struck a chord with viewers. The video on YouTube has now been viewed 15 million times and it has only been airing since Monday.

The Ad Council America is a private, non-profit organization that produces, distributes and promotes public service campaigns on behalf of non-profit organizations and government agencies in issue areas such as improving the quality of life for children, preventive health, education, community well being and strengthening families.