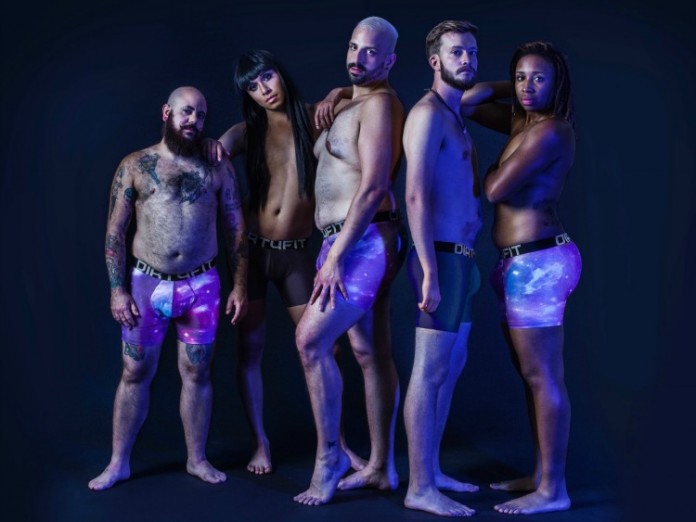 Candian Gay Youtuber has three youtube channels and over 1.5 million subscribers but has now turned into an underwear entrepreneur with his latest collection of “DirtyFit” underwear.

The “Cosmic Collection” as he is calling it, evidenced by the starry blue and purple designs space designs, are made for “all humans,” meaning every kind of body — regardless of shape, size or gender.

Designed entirely in Los Angeles, DirtyFit underwear is made from a unique, soft performance fabric that is cross-functional, also designed in the States by an American mill — meaning each pair is made under fair labor practices.

And while that can bring you peace of mind, other aspects of DirtyFit underwear are all about Davey’s initial mission: a sexier world.

“Part of making the best underwear means creating underwear with a purpose,” DirtyFit notes on its Kickstarter page, which has been around since the brand launched in November 2014.

“The Cosmic Collection is modeled by transgender and gender nonconforming people because it is made for every body in the universe.”

The underwear “models” include Love Banks, Topher Gross, Nate Evertsen, Kevin Markman-Lopez (Lilou Multipass), Hans Rasch, and all embody their own form of independence and lack of categorization.

“I don’t have to listen to what society says about me and I can just be myself. I can be both masculine and feminine,” one of the models in the video says.

“Some days I don’t have to be either. I can just wake up and be human.”

That beyond-gender ethos is embodied in the images but also in the underwear themselves.

The stretchy boxer briefs leaves room for a “package,” but is otherwise not aggressively “manly” in style, nor is it frilly and feminine.

The ads that accompany these undergarments are getting more inclusive too, with more diverse body types and sizes — a much-needed antidote to the images of waifish Victoria’s Secret models we’ve seen for so long.