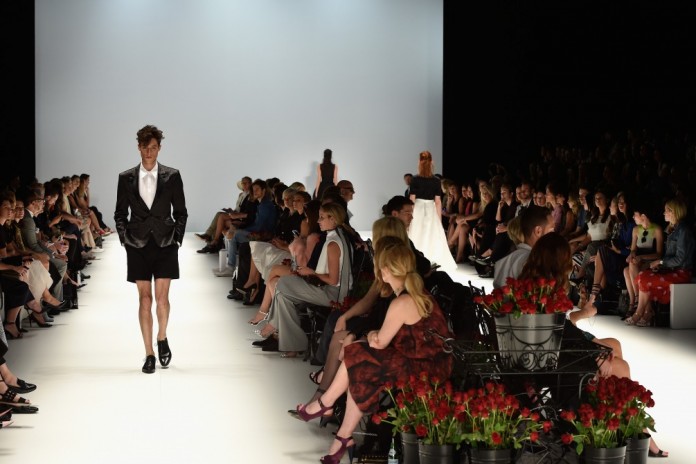 Designers Jayson Brunsdon and Han have stolen the show at Mercedes-Benz Fashion Week Australia after the first two days in Sydney.

As always men’s fashion is few and far between but on day two we got a view of what some designers are seeing for spring-summer 15/16.

Brunsdon has worked in the Australian fashion industry for over 25 years as an illustrator, fashion editor, stylist and creative director but this year he has released his first men’s collection.

Brunsdon sent out a slew of girls in full tulle skirts with mannish brocade jackets – similar to the ones that their boyfriends were wearing, as Brunsdon unveiled his first menswear collection.

Han is an Australian fashion label with foundations formed on a harmonious mixture of refined minimalist architectural design crossed with classical construction.

Founded in 2012 by Khim Hang, the label’s design ethos promotes performance and longevity, with the designer internationally pairing down pieces with thoughtful precision and subtle perfection, ultimately evoking the chic found in simplicity.

Day two finished on a high with the We Are Handsome show and everyone was shipped out to White City tennis courts in Paddington for a nighttime display of very bendy bodies and displays of athleticism courtesy of some sporty models.

The new activewear collection from We Are Handsome looks to be a winner for those who frequent gyms and the like, with its bold, digital-printed leggings, and crop tops, mesh bomber jackets and men’s shorts.

Unfortunately the mens collection was in short supply.