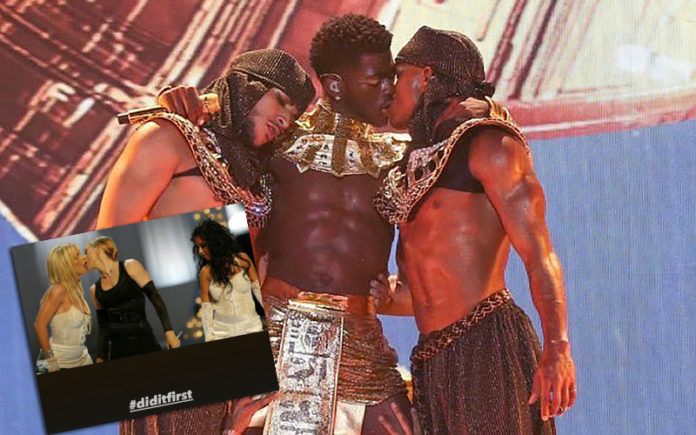 Lil Nas X has been working hard since the weekend to counter the trolls who have been criticising his kiss of a dancer at the end of his performance at the BET Awards, and now he’s asking his fans to chill out and stop going after Madonna.

On Tuesday, Madonna shared her thoughts on Lil Nas X’s BET Awards performance (where the rapper kissed a male backup dancer) on her Instagram stories.

Sharing a photo of Lil Nas’ kiss just above a photo of her own infamous kiss with Britney Spears and Christina Aguilera at the 2003 MTV VMAs, the superstar added the cheeky hashtag “#DidItFirst.”

Fans of Lil Nas X immediately perceived the “Like a Virgin” singer’s post as an insult and began calling the singer out for trying to take away from Lil Nas X’s moment at the BET Awards.

But the man himself was quick to squash the potential beef. Responding to a post from Pop Crave about Madonna’s hashtag, Lil Nas X wrote, “Me and madonna are friends. It’s just a joke.”

After the rapper shared his thoughts, fans immediately began pointing to a video from 2019, where Lil Nas X attended Madonna’s Madame X concert and the two had a conversation in front of the audience during the show.

“I wish you all of the best … Work hard, earn it baby,” she said to the rapper, who quickly responded, “I promise you, I will.”