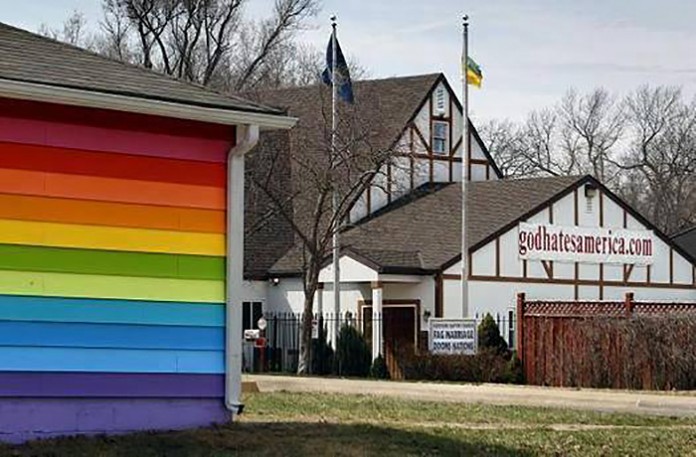 The Governor of Indiana has had an interesting week following the signing of the Religious Freedom Bill.

The bill which has been deemed anti-gay because it allows business owners to cite religious beliefs as a defense when being sued by a private party has led to a world-wide outcry from politicians, business bosses and celebrities.

Indiana is a mere 800 kilometres from Kansas, but outrage is also brewing in the small town of Topeka Kansas where the infamous Westboro Baptist Church (WBC) holds its congregation amidst their hate speeches, particularly against homosexuals.

Two years ago, in direct response to the hatred from the WBC, a charity organisation called ‘Planting Peace’ decided to open The Equality House and set up directly across the road from the WBC to raise funds and awareness of equality.

The rainbow coloured house has responded to the Religious Freedom Bill controversy this week by sending several drag queens to deliver a basket of Easter eggs to Gov. Pence in a massive statement of “pride.”

For every donation made to Planting Peace, the organization sponsoring the Equality House, organizers will add one “pride” egg to the governor’s basket.

As well as showing solidarity for the cause across state borders, the Equality House has also celebrated their second anniversary by staging a mass “kiss-in.”

The “kiss-in was comprised of couples and families of all orientations kissed each other outside the notoriously homophobic church.

A number of Ex-Westboro members also attended the “Kiss-in” after abandoning the church of hate and negativity in favour of the big, positive, gay house that happens to be situated across the road.

Libby Phelps, who is the granddaughter of Westboro founder Fred Phelps, who died last year was one of the converted attendees, she left the church on March 13, 2009

Libby told the Huffington Post that she didn’t think it was right how the WBC treats people outside of the church.

“WBC members are very arrogant and think they’re the only ones who are right, and I don’t like people who think they’re better than others,” Phelps said in the interview.

“Picketing with anti-gay signs was something I was raised to do, says Libby.

“As a child you trust your parents to raise you right and to lead you down the correct path.

“My parents thought they were doing the right thing.

“They believe in WBC doctrine. As I got older, I decided I didn’t believe in the doctrine and the only option was to leave everyone I’d ever known behind and start a new life.”

In the past, the house, which was originally painted the colors of the rainbow flag in March 2013, has played host to a child’s lemonade stand for peace, a gay wedding and a drag show — all essentially on the anti-gay church’s front lawn.