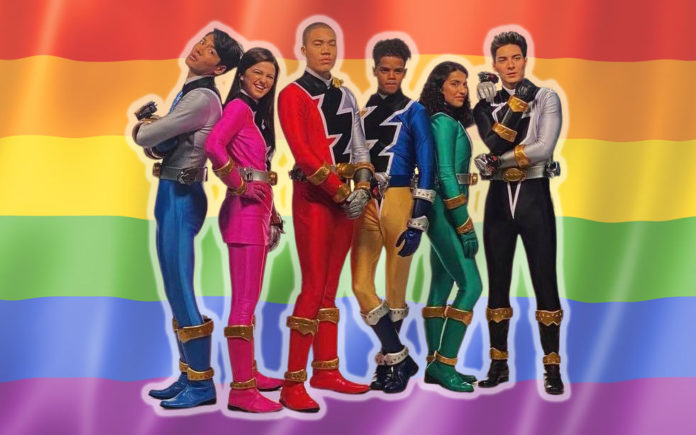 After 28 seasons the Power Rangers children’s series is being transformed by welcoming its first character officially belonging to the LGBTQI+ community.

In a recent episode of the 28th season, filmed in Auckland New Zealand and dubbed Dino Fury, fans learn that the young Izzy – better known as the Green Ranger and played by Tessa Rao – is queer. Even more, she is in a relationship with another woman.

Setting social media alight with excitement, several posters on Twitter have shared the famous scene where we become aware of the character’s queer identity. From the 13th episode of the season, this excerpt shows Izzy, after a sports training, walking away hand in hand with her girlfriend Fern (played by Jacqueline Joe).

Some had suggested the new script development and inclusiveness in the show was just queer baiting but one of the producers on the show Simon Bennett has quashed that rumour.

“I assure you, this is not a marketing stunt,” he wrote in a message on Twitter.

“And, yes, it was about time.” With the episode yet to air in the United States, he hopes this gesture of LGBTQI + inclusion will be well received on American soil.

Very happy with the reaction to Power Rangers #dinofury episode 13, which has just aired in France. Really looking forward to when it is available in the US, and I can jump into discussions.

In the past, the Power Ranger Extended Universe has performed poorly in terms of queer representation. In the 2017 film, implied very subtly that the Yellow Ranger – played by singer Becky G – could be attracted to girls.

There is another feature film project is currently in the works with rumours circulating about the inclusion of a gay Ranger and a trans Ranger, although nothing has yet been confirmed by the production studio.

Tessa Reo who plays Izzy has spoken on Instagram and said she is excited to finally tell everyone about the LGBTQ+ storyline.

“As some of you may now know, Izzy Garcia is indeed the first open LGBTQ+ main ranger in Power Rangers TV history,” Reo said on Instagram.

“Inclusivity and representation is something I’m so passionate about and I couldn’t be more proud to work with a team that feels the same way.

“Thank you for all of the love, it means the world and I can’t wait for all of you to see the rest of her journey”