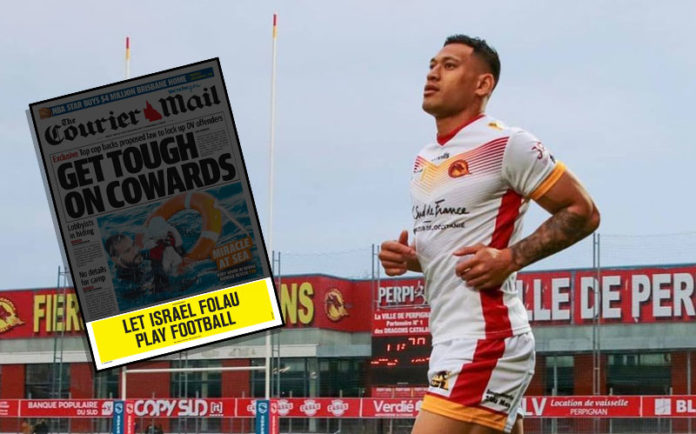 He’s back, well Israel Folau could be back playing rugby league on the Gold Coast in Australia next weekend, but on the homophobic posts that had him sacked from Australia Rugby two years ago he is unapologetic, “I Believe What the Bible Says”.

The question as to whether he stands by his controversial social media posts was put to Folau during a bizarre media conference fronted by himself and billionaire Clive Palmer who is backing his return to the pitch to play rugby league with the Queensland club Southport Tigers.

Palmer also took out a front-page advertisement in Friday’s The Courier-Mail, demanding: “Let Israel Folau play football”. Queensland Rugby League is yet to make a determination on Folau’s application and is facing a huge decision given how polarizing a figure he is.

Folau trained on Thursday night with the team, that competes in the local Gold Coast competition, and is expected to make his debut next weekend, claiming the move was prompted by a desire to play with his two brothers.

Folau dragged himself into a messy legal battle with Rugby Australia when he shared on social media that ‘hell awaits’ gay people.

The post is still live on Folau’s Instagram and the saga engulfed rugby but Palmer claimed he does not know of Folau’s views on the LGBT community.

“All I know is he’s placed on Twitter something – a quote from the bible. I know (the bible is) used every day in church and by millions of Australians,” Palmer said.

“To me it’s nothing extraordinary that someone makes a quote from the bible. It’s grown out of all proportions.

“It shouldn’t affect a person’s livelihood, supporting his children. We don’t want to bring that into sport.”

Folau, who said he has had “great support” from the public, refused to directly address questions about his views.

Asked if he stands by the words in the controversial post that led to his RA sacking, Folau said: “I’ll tell you what I do stand for. As a Christian, I stand by the bible and what the bible says.”

“Every written word that’s written in that book, I stand by that. That’s all I say about that,” he said – as you can watch in the video above.

Asked directly if he is homophobic, Folau reiterated: “As I said, I believe what the bible says. And it’s clear. I didn’t write the bible. That’s God’s written and I believe that wholeheartedly.”

“You’ve got to read the bible in context. You ask me all these questions but have you read the bible?” Folau said, receiving ‘yes’ in response.

Palmer moved the press conference forward by declaring “I don’t think it’s a really big issue …that’s not an issue, we’re here to win the premiership.”

“Mate, no regrets at all in life,” Folau added later.

Things happen for a reason and I’m so thankful for what I’ve been through because it’s brought me closer in my relationship with god.”

French Rugby League club Catalan Dragons, who initially signed Folau on a one-year deal before later extending it through the 2021 season, have indicated they would demand compensation if the player signed with an Australian club.

Palmer also believes there is “no legal basis at all” that Folau’s contract cannot be registered by Queensland Rugby League.

“I’ve got some resources and if it got down to a legal battle … it would go down very seriously,” he said.

Southport Tigers announced the signing with a noticed on their Facebook page on Friday night and the response has been overwhelmingly positive with the majority of comments supporting the move and showing interest in being at the club for his match next weekend.