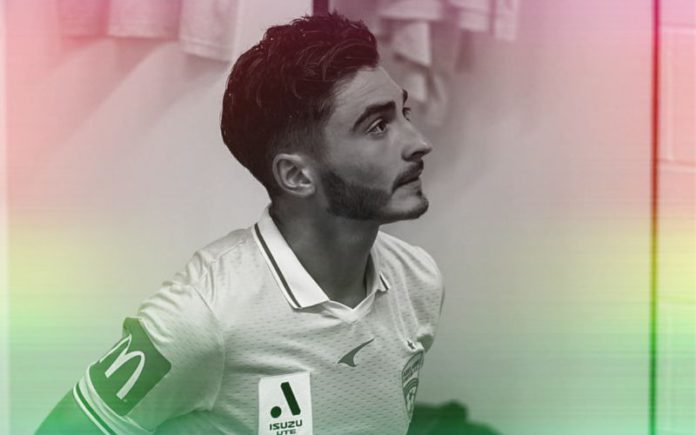 Footballer Josh Cavallo, currently the only professional playing in a professional football league in the world, has hit out at spectator homophobic abuse and also the failure of Instagram to do more to eliminate abuse from its platform.

Following the A-League match on Saturday night between Cavallo’s Adelaide United and Melbourne Victory at AAMI Park in Melbourne, Cavallo took to social media saying he had no words to describe how disappointed he was at the abuse he suffered during the game.

“I’m not going to pretend that I didn’t see or hear the homophobic abuse at the game last night,” Cavallo wrote on Instagram.

“There are no words to tell you how disappointed I was. As a society, it shows we still face these problems in 2022.

“This shouldn’t be acceptable and we need to do more to hold these people accountable. Hate never will win.”

Cavallo came out publicly in October 2021 becoming the only footballer in the world that is out and playing in a professional football league. He was praised across the globe for his courage but the fear was always there that his announcement wouldn’t be welcome by everyone.

“We are appalled by the verbal abuse Josh received by fans at AAMI Park last night,” Kosmina said.

“Adelaide United is proud to be an inclusive and diverse football club, and to see one of our players subjected to homophobic abuse is disappointing and upsetting.

“Josh continues to show immense courage and we join him in calling out abuse, which has no place in society, and it will not be tolerated by our Club.

“We will continue to work with the Australian Professional Leagues and Melbourne Victory to identify perpetrators and prosecute them accordingly.”

Cavallo, in his post, suggested supporters had taken a stand at the match following the comments and said he will never apologise for living his truth.

“To all the young people who have received homophobic abuse, hold your heads up high and keep chasing your dreams. Know that there is no place in the game for this.

Football is a game for everyone no matter of who you are, what colour your skin is or where you come from.”

Cavallo also singled out Instagram after he has received the same sorts of abuse online, saying the social media platform needs to do more.

“To @instagram I don’t want any child or adult to have to receive the hateful and hurtful messages that I’ve received.

“I knew truely being who I am that I was going to come across this. It’s a sad reality that your platforms are not doing enough to stop these messages.”

Cavallo’s Instagram post lit up with supportive messages from across the board including from Melbourne Victory members and supporters.

In a short statement, Melbourne Victory said it is committed to celebrating diversity in football, and strongly condemns this behaviour which has no place at the Club.

“Melbourne Victory sees football as a platform to unite fans no matter what background. Spectators found to have breached these standards will be banned from future matches,” the statement read.

“The Club is working with the League, Stadium and Adelaide United to investigate the matter further.”