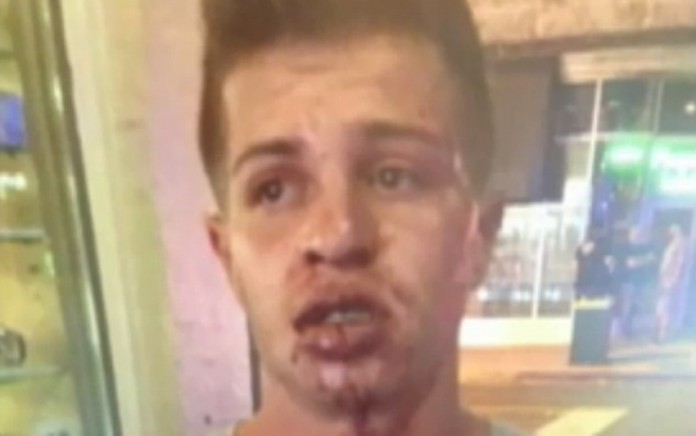 Miami, the place that welcomes gays from around the world looking for sun, sand and fun has been rocked recently with news that a tourist visiting from California became the victim of a brutal attack that left him beaten, bloody and swollen.

Jordan Schaeffer, 25, from Los Angeles, was visiting Miami Beach with his partner when the incident happened on March 14.

The two were at a Burger King restaurant around 3am and had just shared a kiss when he was approached by a man in the line.

‘It was just a simple kiss with my boyfriend,’ Schaeffer told NBC Miami.

Schaeffer is calling what happened to him a “hate crime,” and says he was targeted because he is gay.

Surveillance video captured the violent attack. At one point, the attack wrapped his legs around the victims head in what, police say, appears to be a professional fighting move.

The boyfriend attempted to stop the attack but was pushed away by another man police believe was with the attacker.

The victim suffered a shattered lip, nose and sense of security.

“I’ve never been victimized for my sexuality. It’s kind of something that is now… to be honest, kind of scared. I mean, it just doesn’t make me comfortable.”

Investigators are still looking for the attacker.