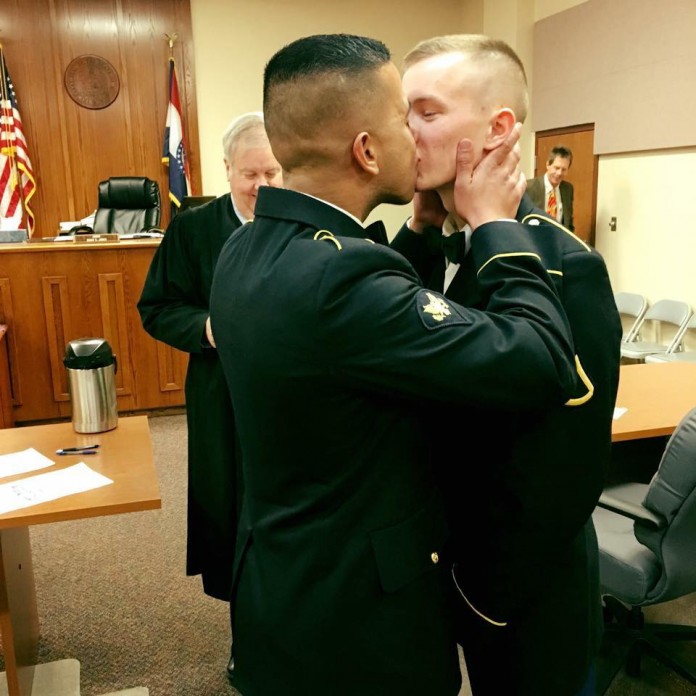 A gay military couple in the US have sent the internet into a spin with their wedding kiss being shared across the world.

Spc. Shane Adriano and Pfc. Tristian Resz chose the Greene County Courthouse as a venue because they wanted something small and intimate for their Feb. 11 wedding.

It was to be just the happy couple, a few supportive friends and a judge.

But after they shared their “first married kiss” photo on Facebook, their small ceremony turned into a worldwide event.

The American Military Partner Association posted the photo a few hours after the wedding.

As of Wednesday night, that post has been shared 1,500 times, has almost 5,700 likes and more than 319 comments and it continues to go viral across the world.

Adriano told the Springfield News-Leader they have long since lost track of how many times the photo has been shared.

“It just keeps getting reshared,” he said.

“We had a little bit of negative comments on there, but I wasn’t even expecting that many people to like it and share it over and over again.”

Adriano said they appreciate the warm wishes coming from around world.

Resz said many of the positive comments have come from veterans and people in the military.

“The majority of people who were commenting and sharing, they were doing it because they are proud of how far the military has come,” Resz said.

Adriano proposed to Resz a couple of months after they met last fall.

“I know a lot of people don’t believe in love at first sight, but sometimes you just know,” Adriano said.

“That is how I felt with me and him.”

“I realized this is someone I want in my life forever,” Resz said. “This is the one person I can’t live without.”