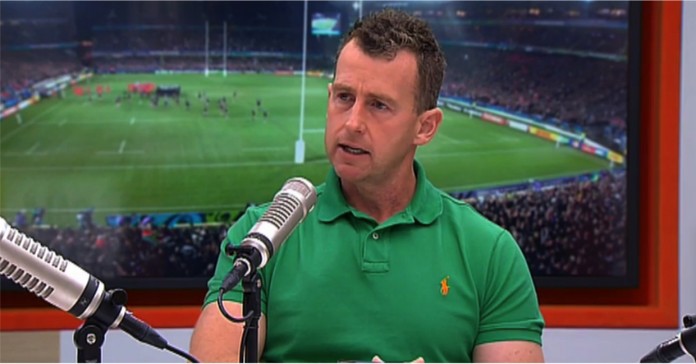 International referee Nigel Owens will be refereeing the Bledisloe Cup decider between the All Blacks, and the Wallabies tonight (Saturday 15 August 2015) at Eden Park in Auckland.

Speaking with Paul Henry on TV3’s Paul Henry Show, Owens tells all about how he copes with heckling and his personal struggles growing up as a gay man, in the “heterosexual sport” of rugby.

“The Welsh are pretty well humoured,” he explained when asked about how he copes with heckling from irate fans.

“I’ve had enough practice at responding to them.”

When questioned about his sexuality Owens said he’s had some ‘tough and dark times’, it was very tough and one of the most difficult times in his life.

“I was in a state of depression”

Owens explains that he attempted to take his own life. He left a note for his parents saying that he “wasn’t able to carry on in his life anymore”

Fortunately Owens was found by the rescue helicopter and was taken to the local hospital.

Owens believes he received his “wake up call” to help him accept who he was when, he woke up in hospital after a few nights in intensive care and his Mum said, “If you do anything like that again, you will take me and your father with you.”

Owens has referreed more than 50 test matches and admits that he’s “made a few” mistakes in the past, however just like the players in the game, he just hopes the mistakes “don’t effect the outcome of the game” and that the best team wins on the day.

Owens believes that Rugby Union is the greatest team sport in the world in the way it brings people and nations together.

“If it wasn’t for the great sport that Rugby Union is in allowing me to be who I am, I wouldn’t be able to do the job, and probably wouldn’t be here today.”

Owens has received many letters and messages from people thanking him for being open about his sexuality, as people believe that in him doing that, it has helped themselves or the people they love, come to terms with their own sexuality and accept who they truly are.

Owens is humbled by the message of support and gratitude and believes coming out was something he had to door himself.

“If I was to say I came out to help other people, I would be lying. I came out because it was something I had to do.”

If you think you or anybody you know, may be suffering from depression or thinking about suicide contact the depression helpline on: 0800 111 757 or visit their website.