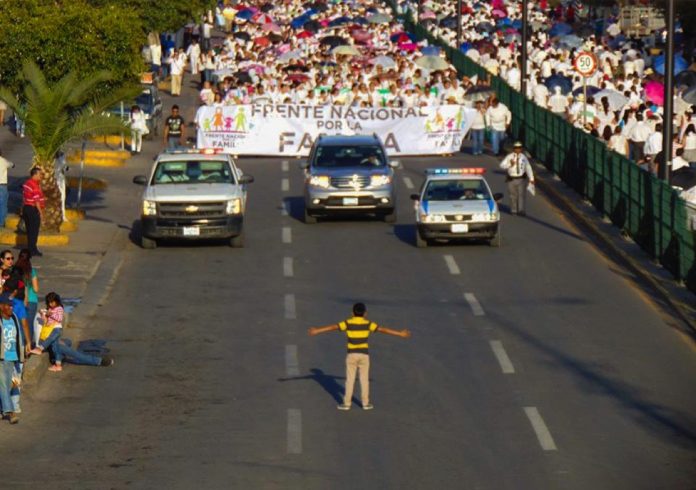 As thousands of homophobic protestors took to the streets of a central Mexican city marching against same-sex marriage, a 12-year-old boy has been photographed showing his defiance against the demonstrators.

The photograph taken by journalist Manuel Rodríguez will surly go down as one of the most iconic photo’s in recent history, highlighting the courage and strength of a child who was prepared to stand up for what he believed in and thought was right.

The demonstrations which occurred in the City of Celaya, Guanajuato saw thousands take to the streets in response to an announcement that the nations President Peña Nieto, intends to change the country’s constitution, leaving the door open for the legalisation of same-sex marriage.

In shock and disbelief at what he was seeing prior to taking the photo, Rodríguez says “At first I thought the child was only playing.”

Questioned on why he told up to the demonstrators, after being safely removed from the street and from the path of the oncoming protesters, the boy replied, “I have an uncle who is gay,” the boy replied. “And I hate people that hate.”

The protests which were organised by the National Front for the Family, a coalition of conservative civil society organisations and religious groups, estimate that over forty thousand people took part in the demonstrations across Mexico.

Counter-demonstrations supporting the introduction of marriage equality also took place the following day, highlighting the how passionate both sides of the equality debate are as Mexico continues to battle with the issue of equality.

Since the legalisation of same-sex marriage in Mexico City and ten of the country’s thirty one states, Mexico’s supreme court has ruled that any law which restrict marriage to be between a man and woman only would be unconstitutional, however but many states continue to defy the ruling.