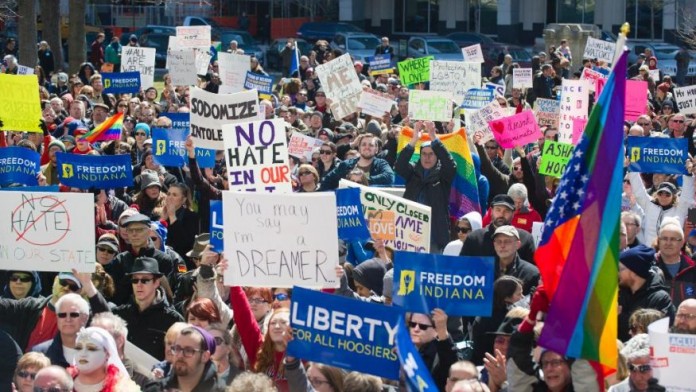 As the outrage continues over the ‘religious-freedom’ bill that was signed by Indiana State Governor Mike Pence last week, Pence still defends the bill saying saying there is “a tremendous amount of misinformation and misunderstanding” about the law.

The new law is said to give business owners back their religious freedom but in essence it allows businesses to refuse service to anyone who is gay.

The governor, speaking on US Sunday Television, said he expects additional legislation this week to clarify the intent of the law.

One idea under consideration is a proposal to add sexual orientation as a protected class under the state’s civil rights laws.

“This isn’t about disputes between individuals,” he said. “It’s about government overreach, and I’m proud that Indiana stepped forward, and I’m working hard to clarify this.”

A number of big names such as Ellen DeGeneres and Ashton Kutcher have condemned the law.

Apple CEO Tim Cook said he was “deeply dissappointed” about the law.

“Around the world, we strive to treat every customer the same — regardless of where they come from, how they worship or who they love,” Cook said.

The head of Salesforce Marc Benioff and the Mayor of San Francisco Ed Lee have both announced boycotts of the state while US Presidential candidate Hillary Clinton said in a tweet “Sad this new Indiana law can happen in America today. We shouldn’t discriminate against ppl bc of who they love.”

The powerful National Collegiate Athletic Association (NCAA), hosting the US men’s college basketball finals in Indianapolis next week, said it was “especially concerned” how the law would affect its student-athletes and employers.

The White House Press Secretary Josh Earnest has alos weighed into the criticism.

“It should be easy for leaders in this country to stand up and say that it is wrong to discriminate against people just because of who they love,” he said.

“Governor Pence is in damage-control mode this morning, and he has some damage to fix.”

Thousands of people have rallied against the law on the weekend and more support is expected over coming days.