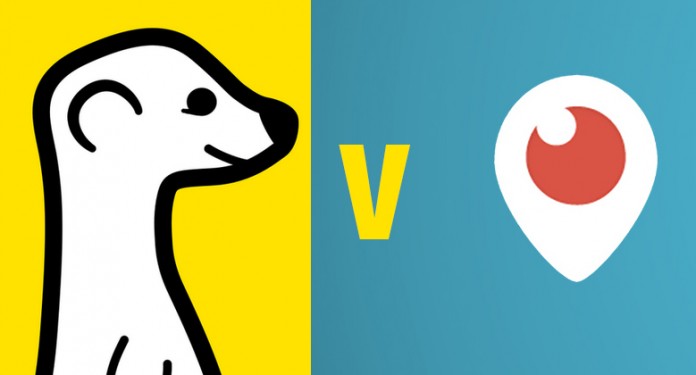 The tech world was buzzing over the last few weeks when an exciting new social media app called Meerkat was released and featured at the recent South By Southwest Interactive conference in Austin, Texas.

The app has brought live streaming back into vogue, yeah I know we’ve had that on pc’s for years with Justin TV and uStream just to name a few and television has been streaming into our lounge-rooms via every device known to man in the last few years, but putting live streaming into the hands of smartphone users is something else entirely.

Not only does Meerkat allow you to watch live streaming but it allows you to live stream as well, hitting on many of the more popular forms of video these days such as Snap Chat and Instagram.

Now the excitement was growing that this would be the next big thing and Meerkat was on the top of everyone’s try list…. until yesterday….. when Twitter launched their recently purchased app called Periscope and suddenly an an evolutionary change in the way we view all types of content now had two almost identical apps fighting for the same market.

Periscope released off the back of its links with Twitter and they had celebrities all around the world, including downunder, testing the streaming capabilities as a way of short circuiting any support Meerkat had built up over the last four weeks.

So why all the buzz? Can they both survive and infact are they actually so similar. Eikon did some quick testing of both apps today and we’ve put together a quick snapshot of the two.

In Meerkate you can only “like” a stream once, on Periscope you can like a stream as often as you want by just tapping the screen and it sends floating love hearts onto the stream (The broadcaster can also see this which is pretty nifty)

On Meerkat, once you’ve finished streaming, your video is gone from the app completely. You can save it to your personal camera roll, but others can’t watch it anymore. On Periscope, videos are saved to the app and available to your followers for almost 24 hours.

Notifications or Annoyances
Both overkill on the notifications. I get it that push notifications are important for live-streaming. If you don’t know a broadcast is happening in real time, you’ll likely miss it — and tuning in live is pretty much the whole point. But it very hard to even restrict them.

You can opt out of notifications for new followers on Periscope, but neither app offers significant notification settings, which means you’ll get one whenever anybody you follow starts broadcasting.

I had to go and turn them off entirely at one point because there was no way on the apps, this needs to be fixed and fast.

How do they look
Periscope seems to have a lot more happening on the homescreen than Meerkat. It shows up the most recent streams whether you follow the people or not, so does Meerkat but due to the interest in Periscope currently that list is huge. Meerkat has a leaderboard, which is cool but dont think you’ll ever reach that stage as there are so many already miles ahead.

Also the search functionality is average to say the best on Meerkat it pops up with a box to put a username in, who can ever remember a persons twitter handle, where because Periscope is linked directly to your twitter account you just start typing a name and it will instantly crawl through all of Twitter to find the right person to follow.

Sucking the juices out of your phone
Battery life will be a thing as well as data. Both sucked the life out of my little iPhone 5S and neither worked well on 3G or 4G but could handle anything once I got onto wifi.
When testing Meerkat actually crashed a couple of times and I had to turn the phone off and on again to get it working, obviously some bugs to iron out, whereas Periscope it was smooth sailing.
In essence they could both survive, but with the backing of twitter behind it, Periscope is surely to be the one that the general public flock to and that’s where you will get mass adoption.

Time will tell as to whether the bird or the ‘kat’ win this one.

Eikon is on both apps, follow us at @eikon for Periscope & @eikonline for Meerkat