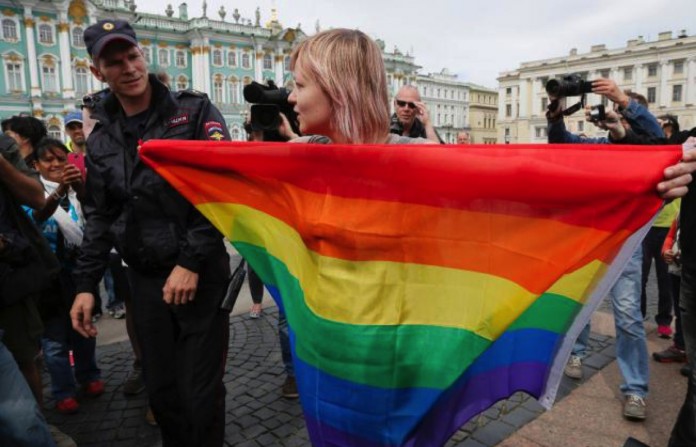 Several activists for LGBTI rights who were staging one-man pickets have been detained by Russian police in the city of St. Petersburg.

The protestors were detained near the Hermitage Museum on Airborne Forces Day, a military holiday, reports the Associated Press.

Yuri Gavrikov, who is an LGBTI rights leader, was detained for “cursing in public”, though Gavrikov denies the charge and is now awaiting a court hearing at a local police station.

After veterans of the Russian Airborne Forces confronted the protestors, tearing their posters and banners, several other activists were taken away by police. The veterans had also gathered in Palace Square, a central location in the Russian city, to celebrate the annual military holiday.

“What they do here is not right, it’s terrible,” said Alexander Fadeyev, one of the paratroopers who had confronted the activists.

“We’re in Russia and not in America. Let them do what they want in America, but not in Russia.”

“Yes, I’m gay, and I have similar rights to other people,” said activist Alexei Nazarov.

Russian law does not require permits for individual pickets, however it’s so-called “gay propaganda” ban is used to prohibit public LGBTI demonstrations throughout the nation.