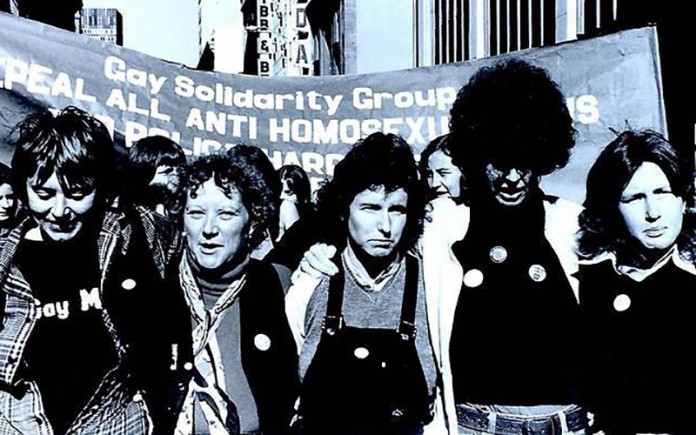 In NSW Parliament on Thursday morning when, after nearly 38 years, the 78ers received a formal apology from the state over the discrimination they suffered at Sydney’s first Mardi Gras in 1978.

“For the mistreatment you suffered that evening, I apologise and I say sorry,” said Bruce Notley Smith, the member for Coogee, as he moved the motion of apology in the NSW Legislative Assembly.

“As a member of the parliament which dragged its feet in the decriminalisation of homosexual acts, I apologise and say sorry. And as a proud gay man and member of this parliament offering this apology, I say thank you.

The bipartisan apology, unanimously passed in both houses of parliament, drew emotional and at times highly personal reflections from MPs, including the Attorney-General Gabrielle Upton and the Treasurer Gladys Berejiklian. Mr Notley-Smith recounted the pain of growing up as a gay teenager in Sydney at the time of the melee.

That evening, more than 500 activists took to Taylor Square in Darlinghurst in support and celebration of New York’s Stonewall movement and to call for an end to criminalisation of homosexual acts and discrimination against homosexuals. The peaceful movement ended in violence, mass arrests and public shaming at the hands of the police, government and media.

About 70 of the original protesters and their supporters rose for a standing ovation as Mr Notley-Smith ended his highly charged speech, commending the tireless activism of the 78ers and acknowledging that the Sydney Gay and Lesbian Mardi Gras had as its foundation the violence and struggle of that night.

The Member for Newtown, Jenny Leong, called for the NSW police to add their weight to the apology, before reading personal stories of violence and terror that June evening. Her opinion was greeted by loud applause by 78ers though Mr Notley-Smith later said that he believes that the cross-party apology speaks for the police as a government agency.

With two openly gay members sitting across the chamber from one another, Alex Greenwich, independent member for Sydney, proclaimed the NSW parliament the “gayest parliament in Australia.”

The cheers that followed were welcome levity in a moment that was grounded, for many of those present, in darkness and pain.
Speaking after the debate, Ron Austin, a 78er and originator of Mardi Gras, said that the apology was “delightful”. Flanked by Steve Warren, Julie McCrossin and a raft of other 78ers, he recalled a jubilant street party turning into a tragedy as he remembered the day.

“We were hunted along all the way down by the police,” he says of the route along Oxford Street.

“We were sick and tired of being treated as second-class citizens, it was intolerable, inexcusable.

“This whole discrimination thing was just absurd to the nth degree.”

The “unqualified and unreserved” bipartisan apology has not come a moment too soon for many of those who were traumatised by the events and the subsequent public outing of many of those involved by The Sydney Morning Herald.

In some instances, protesters lost their jobs and homes, and for some individuals, the trauma ended only in suicide. On Wednesday, The Sydney Morning Herald added its voice to the recognition of wrongdoing and injustice.

Apologising to the 78ers, Darren Goodsir, editor-in-chief, said: “In 1978, The Sydney Morning Herald reported the names, addresses and professions of people arrested during public protests to advance gay rights. The paper at the time was following the custom and practice of the day.”

“We acknowledge and apologise for the hurt and suffering that reporting caused. It would never happen today.”