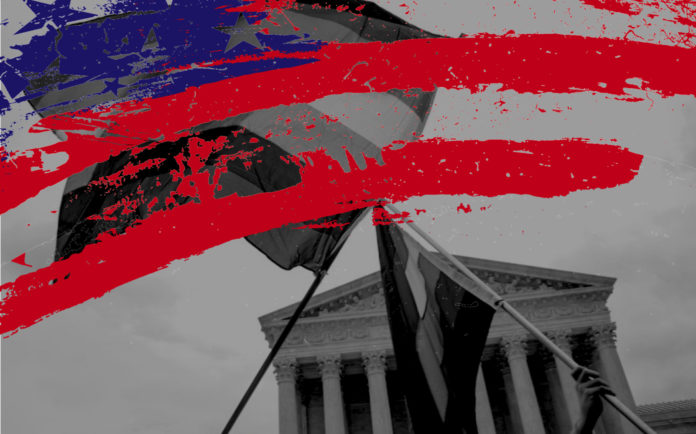 2017 has seen more than 100 anti-LGBTI bills introduced in 29 states throughout the USA so far according to human rights organisation, the Human Rights Campaign.

With all 29 states and their proposed Anti-LGBTI bills being closely watched by human rights groups, the Human Rights Campaign say they are paying extra close attention to Arkansas, Kentucky, South Dakota, Tennessee, and Texas:

Arkansas lawmakers have introduced a dangerous bill that would prohibit changes to a person’s gender marker on their birth certificate. HB 1894, would make an onerous process even more difficult for transgender Arkansans seeking to have their identification documents reflect their gender identity.

SB 17, a bill that would allow student groups at colleges, universities, and high schools to discriminate against LGBTQ students, passed the House in an 81 to 8 vote. It passed the Senate in February 2017 and now heads to Kentucky Governor, Matt Bevin for consideration.

If enacted, SB 149 would enable taxpayer-funded discrimination into state law by allowing state-funded adoption and foster care agencies to reject prospective LGBTQ adoptive or foster parents based on the agency’s purported religious beliefs.

In 2016 Governor, Daugaard vetoed HB 1008 legislation that attacked the rights of transgender children in public schools by attempting to force them to use restrooms and other facilities inconsistent with their gender identity. Daugaard said that meeting with transgender students in his state “put a human face” on the legislation’s potential effect, and helped him to see things “through their eyes.”

In Tennessee, SB 127, a bill that would allow contractors with state or local governments to discriminate against LGBTQ people, was referred to the Senate calendar and could be heard by the full Senate shortly. Anti-transgender SB 771 will be also heard in Senate Ed Committee in conjunction with another anti-trans bill, HB 888, being heard in Senate Ed Subcommittee.

The overturning of SB 6, Ultimately makes it illegal for transgender people in Texas to have access to facilities consistent with their identity, opening them up to increased discrimination and harassment.