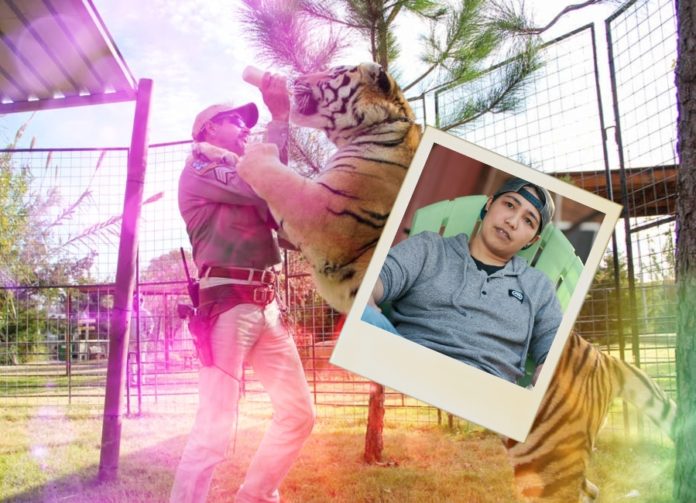 The hit Netflix series Tiger King which is currently the number one trending show on Netflix around the world has misgendered one of the trans stars throughout the entire show.

The revelation of the misgendering comes as fans hone in on the series in never before seen detail focussing on Joe Exotic’s wild lifestyle, the Zoo, and all the people involved, including Saff, who has become one of the only people to be seen in a positive light from the series.

Saff who despite losing their arm while being mauled by a tiger, stayed loyal to the Zoo, and left many viewers querying their gender identity, as it remained unclear throughout the documentary.

Following widespread speculation across social media, Robert Moore who made the original podcast about the Tiger King confirmed to his followers that Saff is, in fact, a trans man, and uses he/him pronouns.

“(Not really ‘trivia,’ but a useful piece of info for anyone discussing the show): Saff, the person who got mauled by the tiger, told me repeatedly that he is trans, prefers to be called Saff (not ‘Kelci’), and uses he/him pronouns. So please do likewise,” Robert wrote on Twitter.

“It’s tricky, because all of the news broadcasts at the time, and most of the people at the zoo, use the wrong pronouns for Saff. (Joe was particularly bad about this.)” Robert added.

The seven-part series Tiger King follows the war between Joe Exotic, (the openly gay, eccentric owner of G.W. Zoo), and the arguably equally as eccentric Carole Baskin, (animal activist and lead at rival Zoo, Big Cat Rescue), who was trying to take Joe Exotic and his Zoo down.

The show twists and turns with plots that leave you speechless, including hundreds of tigers, a highly produced country music career, polygamy, A run for President of the United States, A run for Governor, a mysterious disappearance, a murder-for-hire plot, the alleged murder of animals, tragic deaths, drug kingpins, and of course the black market sale of exotic animals.