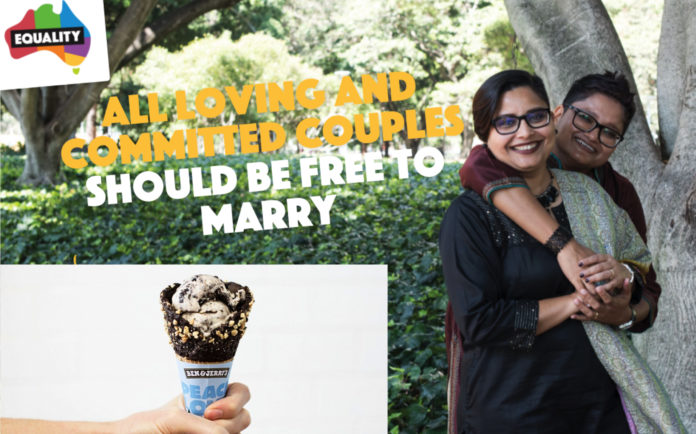 In a bid to highlight the need for marriage equality in Australia, Ben & Jerry’s ice cream have officially banned customers from ordering two scoops of the same flavour.

With all 26 stores across Australia no longer providing same flavour scoops, the company says, “Imagine heading down to your local Scoop Shop to order your favorite two scoops of Cookie Dough in a waffle cone. But you find out you are not allowed … You’d be furious!”

“But this doesn’t even begin to compare to how furious you would be if you were told you were not allowed to marry the person you love.”

With the aim of encouraging Ben & Jerrys’ fans to contact their local MPs to tell them that “the time has come” to make same-sex marriage legal and that “Love comes in all flavours!” the company has accompanied the initiative by installing rainbow post boxes in all of its Australian stores to enable patrons to send a postcard to the local MP.

“We will make sure that the postcards are delivered before the final parliamentary session on June 13th, before the budget is announced. We see this as the next opportunity for to achieve marriage equality, so we need to act NOW!”

Ben & Jerry’s who say they love, love, and think most Australians do too add, “more Australians than ever before believe everyone should have the right to love who they love, and marry them too.”