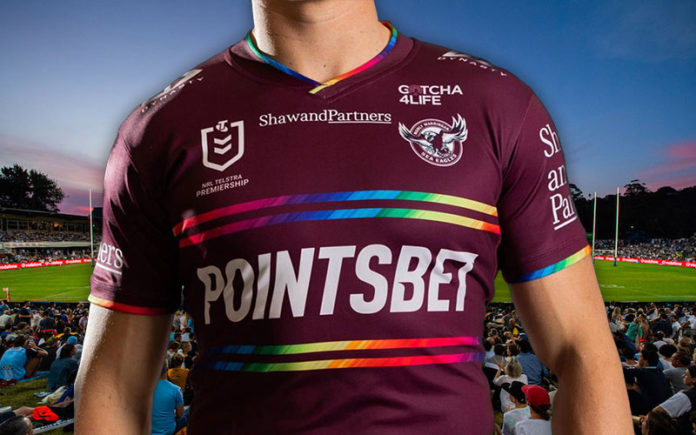 Amidst the storm that has erupted from the refusal by seven National Rugby League (NRL) players to refuse to play a game of football while wearing a rainbow jersey, Australia’s leading LGBTQ+ sport organisation has reminded everyone that Pride rounds and jerseys still make a difference.

“These things matter because we know that many LGBTQ+ people have concerns about coming out,” Purchas said.

“In all sports, including rugby league, participants can heavily censor themselves over fears of being outed, resulting in detrimental impacts on mental and physical health. We know that these concerns can prevent LGBTQ+ people from participating in sport at all levels, from community to professional.

“This is why initiatives like Pride rounds and Pride jerseys matter. They are a statement from an organisation, signalling that a sport wants people to feel safe to be who they are. These initiatives certainly don’t fix everything, but they are important symbols.”

Seven NRL players for the Manly Sea Eagles have decided to stand down from an upcoming match after it was revealed the team would sport a pride jersey.

Following a standoff between the seven players and the club, the team’s coach, Des Hasler, has since told the players that he would support their decision to stand down from Thursday’s game. The club will now struggle to field a team this weekend as many of the players earmarked to replace the initial seven have also refused to play.

Purchas said sport is such an enormous platform to highlight so many causes and issues that communities experience, as well as demonstrating how sport is intertwined with values that Australian society holds dear, such as inclusion and equality.

“We acknowledge the process and consultative issues mentioned by the Manly Sea Eagles today – and their apology to LGBTQ+ people and any other community members who have had concerns and felt hurt by the media commentary around this issue. Conversation, education and building understanding are key to respectfully moving forward on these important discussions in our communities.

“At its most basic, a Pride jersey signals a fundamental value: everyone should feel safe to play. We strongly support the NRL in its endeavours to continue to uphold values associated with inclusivity, safety and belonging, and we would urge all people to think about these as non-controversial values we can unify around.

“Further, we thank the many athletes and administrators involved in any sport where there are Pride jerseys and Pride rounds for their support. We also want to thank the fans for attending these games, buying the jerseys, and showing their support.”