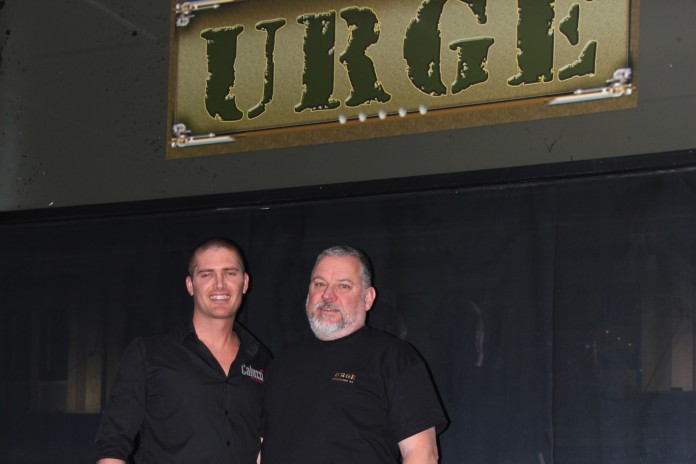 Since 2010 more than $62,000 have been raised for the New Zealand Aids Foundation(NZAF) by local community members Paul Heard and Campbell Orr.

With the most recent donation of over $9,700 being received by the NZAF at an event at Orr’s bar Caluzzi in Auckland.

Together since 2010, Paul and Campbell organised the bars and dance tents at the annual Big Gay Out in Auckland’s Point Chevalier Park and over the years have donated the proceeds to NZAF.

Speaking to Eikon, Campbell Orr explained how the idea came about over a few beverages at Surrender Dorothy’s one Sunday afternoon.

“We thought it would be fun to swap roles at our bars which is how Bear Drag came about and has been a main fixture at Caluzzi for the last 6 years,” Orr explained.

“From that we came up with the idea to work the beer garden at the Big Gay Out with the intention of raising as much money as we could for the NZAF, and so the amazing army of volunteers and supporters was born.”

Executive Director of NZAF, Shaun Robinson said, “It is awesome to have friends, people that like you, believe in you and help you out. NZAF has some of the best of friends in Paul Heard of Urge and Campbell Orr of Caluzzi.”

“We thanked them in the kiwi tradition of a barbi on Sunday 29th March in Auckland’s traditional hot sun and occasional rain.

“As Paul and Campbell were quick to point out then, it’s not just about them (great as they are); it’s about the dozens of volunteers and the whole community of people who Paul and Campbell have been able to call on to get this done.

“This is a caring supportive bunch of guys who enjoy being together, enjoy looking out for each other and by helping the NZAF to respond to HIV and help the whole community,”

The gentleman put their fundraising motivation down to a sense of wanting to help and contribute to the wider community.

“It’s about giving back and assisting organisations that often struggle with funding. And yes just showing the love & support,” Heard explained.

Both Paul and Campbell feel very strongly about the prevention of HIV and also support for people living with HIV and Aids.

“I lost a few good friends over the years and have always felt HIV & AIDS is such a misconstrued disease,” said Heard

Orr explained about his experience that led him to assist the NZAF.

“The first drag queen I ever met was Miss Courtney Cartier who also happened to have HIV so was also the first person I had met that was open about living with the virus,” Orr explained.

“Watching Courtney in her last days was very difficult and I learnt a lot about compassion and love from everyone around Courtney, especially from Mother Karen Ritchie who later set up the Cartier Bereavement Trust in Courtney’s name.”

The extremely humble pair say that they have only been able to raise the amount of money they have raised  because of the team of volunteers who have worked with them.

“There are literally hundreds of people to thank, basically everyone and anyone who has been a part of the beer garden or dance tent over the last six years deserves a huge thanks,” said Orr.

“The suppliers and sponsors that gave us product and other support.

“The community itself who came along and bought a drink all contributed to the $60,000 we have raised.

“The NZAF also had a huge hand in making the events as successful as they are.”

With so many positive moments working together over the years raising money for the NZAF, Paul Heard and Campbell Orr say they are humbled and filled with pride.

Both men intend to continue their support for the NZAF in the future.

More information on the New Zealand Aids Foundation can be found in our Community Section.