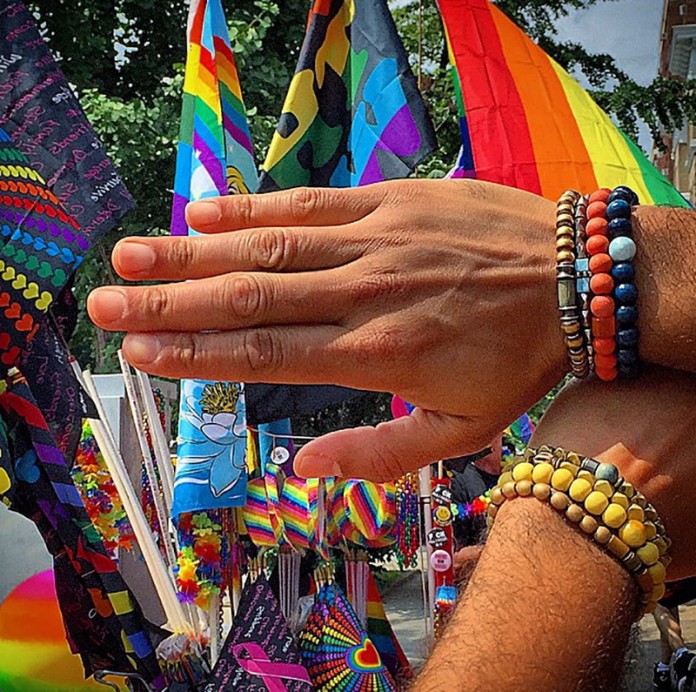 To complete a big weekend of Pride Festivals both Washington DC and Los Angeles held their own parades and parties across the weekend.

In the shadows of the US Supreme Court where a decision will be announced soon that could make same-sex marriage legal across the nation a couple was chosen to have their marriage officiated Saturday on a float during the Capital Pride Parade in Washington, D.C. — where same-sex marriage is legal.

“We’re one of many couples who want to be married and we should be able to get married.”

The couple’s marriage set the tone for the 40th annual Capital Pride Parade reflected on the history of the lesbian, gay, bisexual and transgender community with this year’s theme of “Flashback.”

An array of floats and thousands of participants marched through DuPont Circle on Saturday to celebrate the progress that’s been made in the LGBT community.

More than 150,000 people filled the streets during the parade from start to finish, according to organizers.

They cheered as floats passed by, laughed as they were sprayed with water guns and hugged participants in the parade as they passed. For the second year in a row, the U.S. Armed Forces color guard was to lead the parade.

The Boy Scouts Troops of America were to follow the guard, marking the organization’s first appearance at the parade.

In West Hollywood more than 400,000 prticipated in Pride events along Santa Monica Boulevard, cheering at rainbow-colored floats, cheerleaders in drag and bears in leather straps.

The annual celebration has long served as an affirming place to discuss and demonstrate in response to the victories and disappointments of the gay rights movement – and to take part in one of the region’s most raucous parties.

Following the parade participants joined for a moment of silence to remember those “who who have sacrificed their lives in service of the Pride Movement,” stated a spokesperson for Christopher Street West Association, the non-profit that organizes the event.

“There is so much we can accomplish through this action of peaceful protest to remember those who are no longer with us, or cannot be here today, to celebrate those that fought for Pride and the freedoms we now enjoy and to think of those who cannot celebrate Pride and remain oppressed,” a statement on the CSW’s website read, noting there remains “so much more to be accomplished.”

The day wasn’t a solemn one, however, with marchers encouraged to “whoop, holler, and yell so loud that we are heard all the way to the Capitol, to let the world know that we demand equal rights…”

Several performers were also on hand to celebrate, including stars of the upcoming male stripper-themed “Magic Mike XXL” — Channing Tatum, Matt Bomer and Adam Rodriguez — appeared on a float (with clothes on) while a half-dozen group of mostly shirtless men gyrated and promoted the movie.