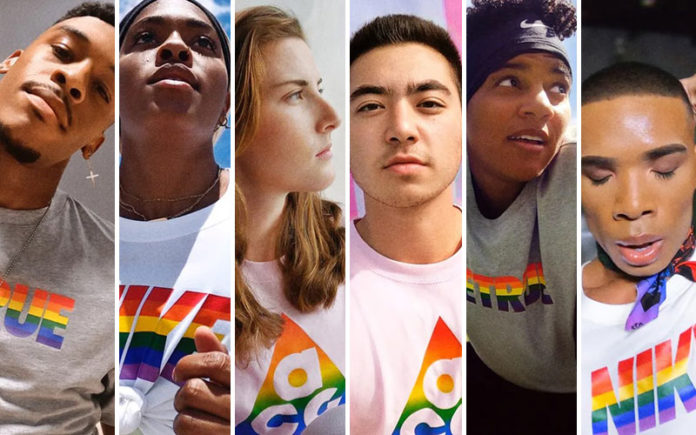 Bringing up the rear of major companies jumping on the Pride Month bandwagon is sports brand Nike which this week has released a new socially conscious ad in celebration of Pride Month that speaks to the ongoing fight for equality and recognizes a few of the athletes that are breaking down barriers across the globe.

According to Nike, these six leaders embody what it means to strive for a better future — for themselves, for each another and for the next generation.

This campaign isn’t the first time the athletic brand has shown its support for the LGBTQIA+ community.

Every summer since 2013, Nike has released its popular BeTrue range of apparel and footwear celebrating diversity within sports and donates a portion of sales from the collection to organizations empowering sports in the LGBTQ community.

This year, Nike is supporting more than 20 local and national organizations across the US with a focus on advocacy in sports, creating safe spaces and elevating the history of the community.

As a swimmer at Harvard University, Schuyler Bailar made history as the first openly transgender athlete to compete for a Division I men’s team.

“Being a trans athlete is about my passion for sport,” said Bailar, whose activism extends from the pool to over 200+ public speeches, to date.

“It’s about not letting anything hold me back: not other people, not injuries, not rules and definitely not my identity.”

Choreographer and dancer Quinton Peron, one of the first male cheerleaders to perform during the Super Bowl, encourages the youth to be allies for one another and to follow their dreams.

“You weren’t put on this earth to abide by somebody else’s rules.”

As a goalkeeper for the U.S. Women’s National Team and the Portland Thorns, Adrianna “A.D.” Franch is a backbone for her teammates.

“Teams should always allow individuals to shine in their strengths and be supported, regardless of their weaknesses,” said Franch, who advocates for self-love, fearlessness and equal rights — on and off the field.

“That’s what brings us together and moves us forward.”

For more information of the Nike BeTrue 2020 collection in celebration of Pride Month go here.