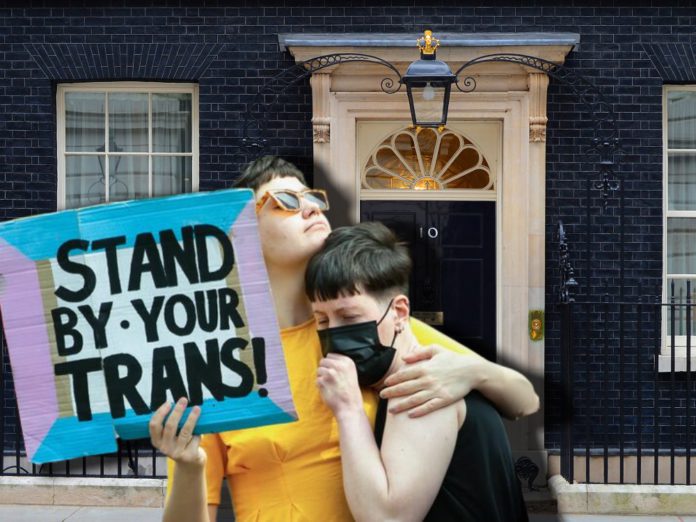 LGBTQ+ protestors have taken to the streets outside Downing Street against the UK government’s decision to veto the Scottish Gender Recognition Reform Bill.

The Scottish Gender Recognition Reform Bill, which passed (86-39) in the Scottish Parliament in December 2022, aimed to make it easier for trans people to recognise their identified gender in Scotland legally.

The amendments in the bill would include removing medical requirements, lowering the age limit from 18 to 16, and cutting the time period that applicants are required to live as their identified gender from two years to a few months.

However, following the bills passing in the Scottish Parliament, the UK government announced on Monday, the 16th of January, that the reforms would be blocked from passing.

Angry at the UK government’s decision, a small group gathered outside number 10 Downing Street to protest the move.

Holding signs reading “trans people are humans, not threats” and “trans women are real women”, the protesters are said to be planning a larger follow-up protest in a few days, adding more pressure on the UK government to change their decision to veto the Scottish bill.

The UK government’s move to block the bill has also caused backlash from many Scotts, including the Scottish First Minister Nicola Sturgeon, who sees the veto as a direct attack on the Scottish parliament.

“This is a full-frontal attack on our democratically elected Scottish Parliament and its ability to make its own decisions on devolved matters,” Sturgeon said via Twitter.

“@scotgov (the Scottish government) will defend the legislation & stand up for Scotland’s Parliament. If this Westminster veto succeeds, it will be first of many,” She added.