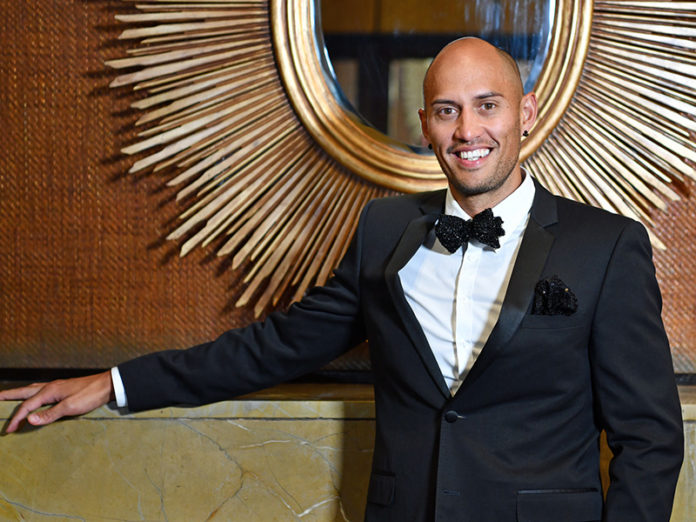 After a four week public campaign and an intense two days of challenges, Ricky Devine-White was announced as the winner of Mr Gay New Zealand 2018 on stage at Caluzzi Bar and Cabaret on Sunday after the Ending HIV Big Gay Out was cancelled after huge rainstorms battered the area.

The finale was moved after Big Gay Out was cancelled at 12.30pm. This was the first time in its history that the event had to be cancelled. All of the remaining seven Mr Gay New Zealand finalists spent the day preparing at SkyCity Auckland before conducting their public speaking challenge on stage at Caluzzi.

The final judging came down to the wire with Ricky Devine-White the winner ahead of Mike Bryant in second spot and Jake Angus placing third.

The announcement followed the final challenge which saw each of the finalists speak to the crowd about why they were in the competition and their goals for the year ahead if they were to win.

In accepting the award in front of the crowd at Caluzzi Ricky paid tribute to his husband and mother for being so supportive.

“It’s not easy to put yourself forward and be judged by your peers, and today has been so special,” Ricky said after his win.

“The last person that I want to say thank you to is my mum because she is here.”

Ricky’s mum came forward and embraced her son on stage.

Speaking exclusively with Eikon straight after the finale Ricky was so excited about the whole Mr Gay New Zealand process and encouraging everyone to consider entering next year.

“If anyone’s thinking about going into Mr Gay New Zealand, next years event is going to be even bigger and if it’s a goal then do it, you have to.

“I’m overwhelmed by how much support I’ve had over the last months which shows there is a huge community out there that want to support the LGBTI+ people and we just need to let them support us.”

Ricky now heads off to South Africa in May for Mr Gay World to represent New Zealand and he is looking forward to taking on the world and his good mate Mr Gay Pride Australia Jordan Bruno.

“New Zealand this is going to be the third time we win [Mr Gay World], and Jordan Bruno, I’m coming for you.”