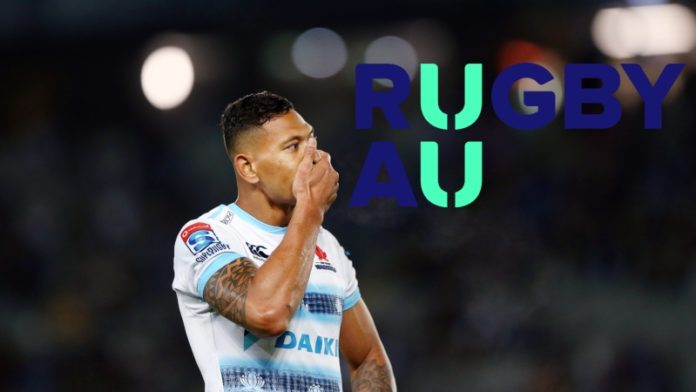 It is now beyond time for Rugby Australia to actually practice what they preach and suspend Israel Folau after he again shared an image on Instagram that listed groups of people he believes are set for eternal damnation. “Drunks, homosexuals, adulterers, liars, fornicators, thieves, atheists and idolators – Hell awaits you,” it states.

The devout Christian wrote alongside the image. “Those that are living in Sin will end up in Hell unless you repent. Jesus Christ loves you and is giving you time to turn away from your sin and come to him.”

On Twitter, he shared the same sentiment as a comment to a news story about Tasmania becoming the first state in Australia to make the inclusion of gender optional on birth certificates.

This is not the first time the arrogant full-back has felt he has the moral authority to preach fire and brimstone towards LGBTQ people.

And the last time, Rugby Australia failed to do anything other than provide a meekly worded response about freedom of speech and this morning they have responded by stating that it “does not represent the values of the sport and is disrespectful to members of the rugby community.” It added that its integrity unit is “engaged on the matter”.

Well, it’s time they don’t just engage on the matter but actually, do something to reprimand this bloke and show they have a spine.

Rugby Australia is a Foundation Member of Pride in Sport and that is all about improving all aspects of LGBTI inclusion, achieving best practice as benchmarked by the Pride in Sport Index and creating better health outcomes for LGBTI workers, players, coaches, referees, volunteers and fans through creating inclusive spaces which remove homophobia, stigma and discrimination.

If Rugby Australia cannot make a stand over one of their players then how can they claim to be a member of this organisation.

Folau, 30, first courted controversy last year when he stated his opposition to Australia legalising same-sex marriage. He said then: “I love and respect all people for who they are and their opinions. but personally, I will not support gay marriage.”

He then went to add in a separate post that gay people faced hell, “unless they repent their sins and turn to God.”

In its own statement, International Gay Rugby (IGR), the global organisation for the world’s gay and inclusive rugby clubs, condemned Folau’s new posts.

“The effects these hateful comments will have on LGBT people are enormously harmful,” said Ben Owen, IGR Chair.

The organisation said the bigotry came in the week of the launch of Europe’s biggest LGBT+ inclusive rugby tournament, the Union Cup, which will be held in Dublin in June.

“We want all LGBT athletes out there to know that rugby is a sport where you are welcome and respected, a sport of values that doesn’t allow for such bigotry or discrimination of any kind,” said Owen.

Australia’s rugby administrators are now under intense pressure and must take action against the defiant Folau.

“We are taking a keen interest on the findings of Rugby Australia’s Integrity Unit when they meet tonight and applaud the union for taking the stance that these kinds of comments are unacceptable,” Owen said.

Those that are living in Sin will end up in Hell unless you repent. Jesus Christ loves you and is giving you time to turn away from your sin and come to him. _______________ Now the works of the flesh are manifest, which are these , adultery, fornication, uncleanness, lasciviousness, idolatry, witchcraft, hatred, variance, emulations, wrath, strife, seditions, heresies, envyings, murders, drunkenness, revelings, and such like: of the which I tell you before, as I have also told you in time past, that they which do such things shall not inherit the kingdom of God. Galatians 5:19‭-‬21 KJV _______________ Then Peter said unto them, Repent, and be baptized every one of you in the name of Jesus Christ for the remission of sins, and ye shall receive the gift of the Holy Ghost. Acts 2:38 KJV _______________ And the times of this ignorance God winked at; but now commandeth all men every where to repent: Acts 17:30 KJV _______________