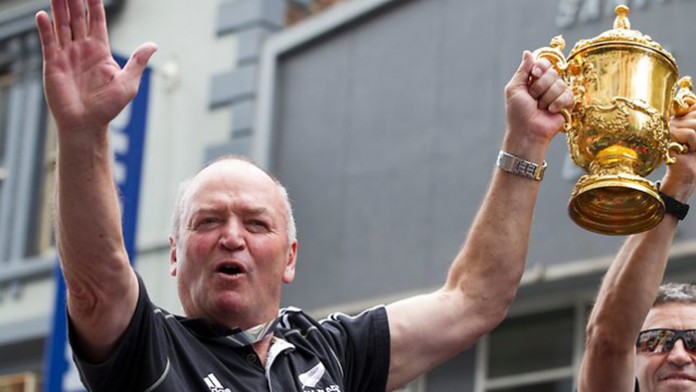 Former All Blacks coach Sir Graham Henry and the Mad Butcher Sir Peter Leitch are going to be guest speakers at a fundraising buffet dinner hosted by New Zealand’s only gay and inclusive rugby team on Saturday night August 30.

The New Zealand Falcons are a gay and inclusive rugby team based in Auckland but extend their wider squad to include members from all over the country.

They are fundraising for the 2016 Bingham Cup, an international gay rugby tournament, to be held in Nashville in the United States of America.

Mr Henry said he is only too pleased to speak at the function and do what he normally does, which is to help others.

He said he will talk about a number of things from rugby to the All Blacks and the Rugby World Cup.

“I think it’s good that people play sport for many many reasons and this team is no different from any other team,” he said.

Tickets cost $110 for the buffet dinner that will also include musical entertainment provided by Anika Moa.

The dinner will be held at the Ellerslie Event Centre on Saturday August 30.

The Falcons are hoping to raise around $30,000 to cover the costs of accommodation and registration fees for the Bingham Cup tournament.

The Falcons won the Bingham Bowl, first place in the second tier of the Bingham Cup, after travelling to Sydney to compete in the tournament last year.

New Zealand Falcons club chairperson Gavin Hyde said the club has a mission to enable gay men to participate in and support rugby.

“One of the driving factors of the club is to have a team in competition at all times,” he said.

The Purchas Cup, a trans-Tasman tournament between four sides from Australia and New Zealand, will be held in Auckland for the first time in September of this year.

Seven teams from both Australia and New Zealand will compete in the Purchas Cup and will draw around 150 players.