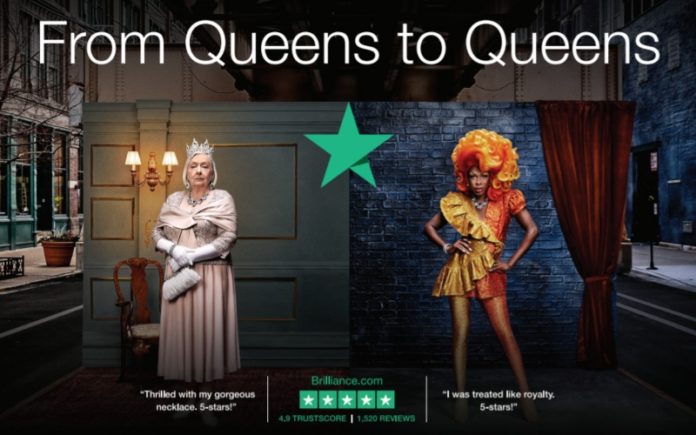 Honey Davenport, the stage name of James Heath-Clark, competed in season 11 of RuPaul’s Drag Race but the performer, singer and activist is best known as a fixture of the New York City nightlife scene.

She features in a commercial called “From Queens to Queens” in which a pretend “Queen Elizabeth” visits Trustpilot.com and sees a review about some “jewels” that was left by the “Drag Queen” Honey Davenport and she immediately asks her aides to buy them.

“One queen bought the jewels, the other queen left a brilliant review on Trustpilot.com,” claimed the commercial voiceover.

“From queens to queens the people have spoken. It’s time to use your voice and be heard.”

The commercial is backed up in American cities with digital advertising on both online and billboards and it also encourages reviewers to share a recent, authentic experience on Trustpilot for a chance to win a one-of-a-kind global adventure based on destinations and events that their peers have reviewed.

I might be in Australia but there is a huge freaking billboard of me in Chicago. This is a dream come true. I can’t believe where this journey has taken me and how many things are to come. I am so humbled and thankful for all of the opportunities life has provided me. Laying in my bed in tears thinking about how little 15 year old me who felt like he would never get out of West Philly would feel about this moment. Stay tuned to see my first ever international commercial for @trustpilot. #blessed #representationmatters . . . ????????‍♀️ by @steven_perfidia ???? by @blackandwhitestriped Check out one of the largest review sights in world at https://reviewbetter.trustpilot.com/

Chief Marketing Officer at Trustpilot Gabriele Famous said the Be Heard campaign is the culmination of 12 years of organic brand presence and growth on a global level.

“We’ve built a household name in overseas markets, largely thanks to consumers who have both the passion and desire to share their feedback with companies and with one another,” Famous said.

“As we approach 100 million reviews of hundreds of thousands of businesses, we want to inspire that same action in the U.S. by empowering people, by giving them a platform where their voice will not go unnoticed.”

Since Trustpilot’s launch in 2007, the company has quickly become one of the largest and most powerful consumer review platforms in the world.

Trustpilot is also the major sponsor for Mr Gay Pride Australia in 2020.

Zachary Pardes, Director of Advertising and Communications of Trustpilot in North America said in today’s divisive and sometimes polarizing climate, Trustpilot has really become a place where consumers can unite.

“Consumer feedback plays a meaningful role in bettering relationships and experiences with the companies and brands we bring into our lives every day.”

See the Queens to Queens commercial at your gay nation below.